What Is an Attack Surface in Cybersecurity?

How Can You Minimize Your Risks? Best Practices to Reduce Your Attack Surface.

What vulnerabilities are being used in this specific type of threat attack?

Moreover, a threat attack surface is often confused with an attack vector, representing the means or method used by an intruder to gain access to networks or even endpoints, with these types of attacks having the quality of being digital or physical.

By being able to take place in a digital or physical landscape, attack surfaces can include the vulnerabilities found in your connected hardware and software environment. This means that in order to keep the network secure, administrators must seek to reduce the total number and size of attack surfaces, proactively, because by having more code, applications, or even devices running on a system, you are increasing the number of vulnerabilities that can be exploited.

What are the key factors that are expanding threat surfaces?

We are living in digitally-driven times, this meaning that the attack surface is getting larger and therefore we need to better understand the mechanisms behind it.

The increasingly popular Internet of Things (IoT) devices are one of the areas which we must treat with maximum attention with IoT devices being highly vulnerable to cyber-attacks because they can’t be secured using traditional security tools. 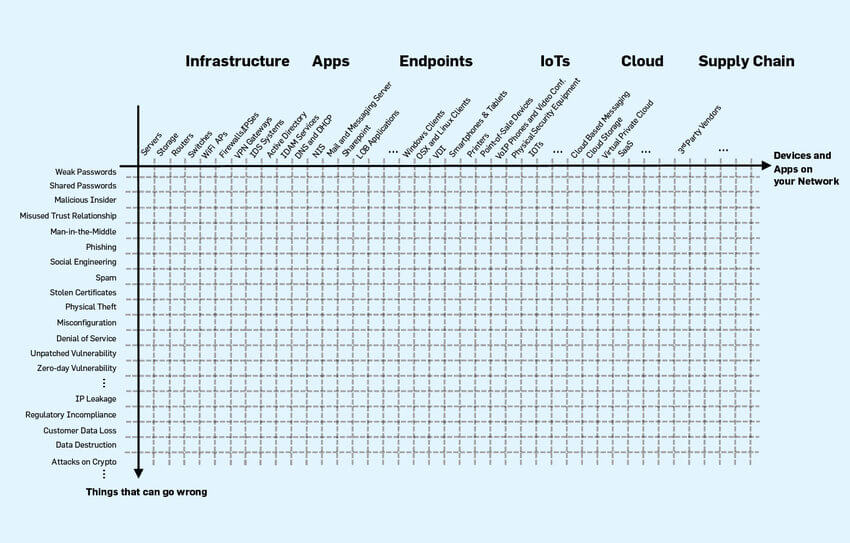 Other attack surfaces can be aimed at endpoint devices such as desktop systems, laptops, mobile devices, and USB portable devices, all of which are important components of an organization’s environment. These endpoints can be targeted by bad actors, but this is not the only way in which they are dangerous, with them being highly vulnerable to inside “attacks” created from accidental actions, disgruntled employees, social engineering scams, and intruders posing as service professionals.

The Most Common cyberattack vectors

This continues to be the most common type of access credential, happening when user credentials, such as usernames and passwords, are exposed to unauthorized entities and, when lost, stolen, or exposed, compromised credentials can give the intruder an insider’s access.

Weak passwords and password reuse create a gateway for the initial attacker to use for access and propagation, with recent attacks like the Mirai one, only highlighting the fact that this threat is real not only for managed devices but also for all IoT-connected devices.

An employee who exposes private company information and/or exploits company vulnerabilities can be considered a malicious insider, they are usually unhappy employees that have access to sensitive data and networks, therefore, being able to inflict damage through privileged misuse and malicious intent.

The purpose of data encryption is to protect digital data confidentiality as it is stored on computer systems and transmitted using the internet or other computer networks; strong encryption must be applied to data at rest, in-motion and where possible, in-processing.

Poor data encryption can lead to sensitive information being transmitted either in plaintext, leaving way for an adversary to easily intercept the data storage, and get access to sensitive data using brute-force approaches.

This type of vulnerability takes place when an error exists in the system configuration, creating the perfect conditions for the hacker to find hidden flaws and an easy entry point for future exploits.

Also known as cyber-extortion, through this method the users are unable to access their data until a ransom is paid with the cost for the data recovery ranging between a few hundred dollars to millions, payable to cybercriminals in Bitcoin.

The targets are contacted through email, telephone, or text message by someone posing as a legitimate institution to lure individuals into providing sensitive data such as personally identifiable information, banking, and credit card details, and passwords.

How Can You Minimize Your Risks?

To conclude, start by understanding your vulnerabilities, knowing the ways your defense strategy can be breached and put in place the protections needed to maintain a secure, resilient cybersecurity posture.

By keeping the attack surface as small as possible you’ll be able to maintain a strong security posture and limit or eliminate the impact or damage an attacker can inflict.

The Best Encrypted Email Services You Need to Use