What Is Social Engineering: The Tactics Used to Manipulate You

You may have heard of social engineering, especially in the light of the Cambridge Analytica scandal. The term has become more or less akin to manipulation via social media channels, but there’s more to its definition than this. In this guide, I will explain both what is social engineering – from a social psychology POV and in the context of information security.

Is the next-level mail protection system which secures all your incoming and outgoing comunications.
Try it for FREE today 30-day Free Trial. Offer valid only for companies.

A. What Is Social Engineering? Three Definitions

Social engineering is a term that first emerged in social sciences, somewhat akin to the direct intervention of scientists on human society. The term ‘social engineer’ was first coined in 1894 by Van Marken, in order to highlight the idea that for handling human problems, professionals were needed. Just like you can’t solve technical issues without the proper skills training, you can solve social issues without similar skills.

At first, social engineering was used in social sciences to mean a positive intervention on society, done by specialists. This was a popular idea in the age of positivism in sociology, around the early 19th.

Basically, back then, social scientists believed that society is ‘evolving’ from less civilized to more civilized and advanced. While this evolution of society was believed to happen naturally and slowly, it could be sped along by scientific intervention.

Hence, social engineering meant the influence of social scientists upon human communities, to the purpose of encouraging social change. It was sometimes also known as cultural engineering.

Later on, after the concept fell out of fashion and this linear evolution model of society was revealed to be naïve, social engineering took on a new meaning.

No longer imbued with the halo of welcome intervention, social engineering started to mean social manipulation, closer to how it is understood today in an IT context. It was still used mainly in political science and social psychology, referring to large scale interventions targeting the change of social and cultural attitudes and practices.

In these social sciences, the term of social engineering has a similar meaning today. But in IT security, social engineering refers to the manipulation of small groups or even single individuals, not societies and communities at large.

A3. In the Context of Security What Is Social Engineering?

Finally, I am getting closer to the point. In the context of information security, social engineering is the act of using people’s naturally sociable character in order to trick or manipulate them.

The term was popularized in the IT niche by Kevin Mitnick, a world-famous hacker, active in the 90s, and later-day security researcher and author of the book ‘The Art of Deception’.

All scams which rely on people’s instinctive desire to be helpful, kind or to submit to authority fall under the encompassing umbrella of social engineering.

Therefore, the definition of social engineering in IT security is an attack which needs human interaction and manipulation in order to succeed in accessing network locations, confidential information etc.

An alternative definition of social engineering, by CSO, is that of ‘the art of gaining access to buildings, systems or data by exploiting human psychology, rather than by breaking in or using technical hacking techniques’.

Any IT attack which needs to exploit a human weakness, alone or in addition to any technical vulnerabilities, can be classified as a social engineering attack.

B. What Is a Social Engineering Attack and How Does It Work?

B1. How Social Engineering IT Attacks Work

Any IT attack which can be qualified as a social engineering attack must use psychological manipulation in order to convince users to make security mistakes. 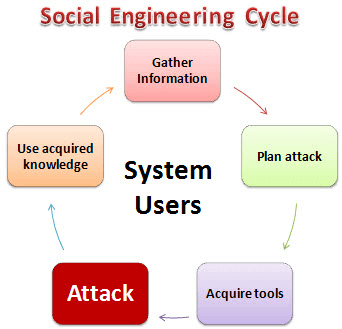 This psychological manipulation needed for a social engineering attack can take many forms:

B2. Types of Social Engineering Attacks

Some common forms of social engineering attacks that you’ve definitely heard of are these:

Now that we’ve established what is social engineering and how these attacks work, let’s take a look at famous examples of social engineering hacks. You’ll see that it can happen to anyone, regardless of how big or small. One moment of keeping your guard down can be all that’s needed for hackers to infiltrate your systems.

#1. AIDS or the original ransomware

The original ransomware virus was a virus named AIDS which acted as a Trojan. It was actually released at a scientific conference by an evolutionary biology researcher who claimed he wanted to raise awareness and money for treating the AIDS disease.

Basically, this Trojan virus is the grandfather of all ransomware codes which followed afterward. It spread via a floppy disk and got emailed further among the early victims only because people believed they were receiving information on how to help AIDS relief effort.

In this sense, the original ransomware infection also counts as a social engineering attack, since it preyed on people’s desire to help.

Kevin Mitnick, the hacker expert on social engineering (later on turned security researcher) made a name for himself in the 90s precisely through his attack on Digital Equipment Corporation (DEC). Because he was in league with some hackers who wanted to take a look at DEC’s OS system but who said they can’t get in without credentials, Mitnick simply phoned and asked for them.

Kevin Mitnick called the system manager from DEC and claimed to be an employee from the developing team, temporarily locked out of his account. The sysadmin promptly gave him a new username and password with a high access level in the organization.

In 2005 and 2006, Hewlett-Packard was undergoing some reputational issues with leaked info in the media.

In an effort to find out which employees are leaking info, the company hired private investigators, who managed to get the personal call records from AT&T for their targets by claiming they were them.

The practice has been deemed illegal by federal law following the scandal, but it definitely breached new horizons in social engineering techniques.

This huge hack which resulted in hackers gaining the personal info of over 500 million users in 2014 relied on spearphishing. By targeting only a few high-level Yahoo employees with tailored messages, the hackers managed to gain access into the Yahoo IT servers. From thereon, the attackers used cryptography and fake cookies to break into the accounts of regular Yahoo users.

Not even the US Department of Justice is exempt from social engineering attacks. As long as humans work there, they can fall prey to social engineering tactics. A frustrated hacker, seeing that he can’t infiltrate the systems any further without an access code, simply called and claimed to be an employee. In other words, he pulled a Mitnick on them.

After obtaining the code, the attacker was able to proceed and infiltrate internal communications. He leaked some privileged info as proof of the hack, prompting the DOJ to consider its security more seriously.

In a very complex way based on building social profiles from every bit of information to be found on people, the advertising firm Cambridge Analytica was accused of successfully manipulating the US presidential elections and the UK referendum on Brexit, aided by Facebook insiders.

This scandal showed everyone that social engineering hacks can sometimes hit very close to the mark of the term’s original meaning (that of changing society).

The Ubiquiti networks were infiltrated in 2015 by a simple Business Email Compromise (BEC) attack, leading hackers to steal $46.7 million. It was as simple as pretending to be high-level managers contacting the employees in the financial department and requesting a transaction to be made.

The SecurID tokens for two-factor authentication from the RSA were widely considered almost unbreakable. But that all changed in 2011, when people inside the company notoriously succumbed to phishing, exposing the company’s data and losing $66 million in the process.

Initially, RSA employees received a fake email claiming to be from the recruiting party of another company. The email contained a malicious Excel sheet attached to the message. If the attachment was opened, a zero-day Flash vulnerability allowed the hackers to install a backdoor Trojan into the infected computer.

While the seriousness of the breach could not be properly assessed, RSA researchers believed it might have affected the security of their 2FA token technology, hence having to redo it from scratch. In the end, this is where the losses went – into the effort of rebuilding a technology everyone previously thought was impenetrable.

The Point of Sale system from Target was breached by hackers in 2013, managing to expose and steal the credit card info of over 40 million Target customers. While the info was stolen by a malware script, the entry point for this malware was a clever bout of social engineering. Knowing that it would be easier to target a smaller fish first, the attackers breached the security of Fazio Mechanical Services via phishing.

This 3rd party supplier had previously been given access to Target’s systems, so by falling prey to hackers, the attackers could now move towards attacking Target, the real prize.

In the 90s, the three Badir brothers were the most extraordinary hackers plaguing the Middle East. Their story is fascinating: all three were blind but with a remarkable talent for hacking. It’s wasn’t all technical know-how, but also social engineering prowess.

They could imitate all voices on the phone (including the voice of the investigator who was on to them), as well as be able to guess the PIN number of a victim simply by hearing it typed in. They would also chat up secretaries of high-level enterprise bosses, being all charming and asking for details about the men these employees worked for. This led them to find out personal details and successfully guess the passwords of these executives.

All these skills helped them carry out a long series of successful social engineering attacks all over the Middle East.

D. How to Protect Against Social Engineering Attacks

Unfortunately, precisely because social engineering attacks rely on people’s trust, it’s hard to protect against them through technical means alone. That is exactly what social engineering is: tricking and manipulating people into helping the hackers circumvent technical protections in place.

There’s both good news and bad news about this.

The bad news is that no matter how fantastic your cybersecurity suite is, you can still get easily hacked via social engineering attacks if you place your trust in the wrong people.

The good news is that as long as you keep yourself and every employee in your organization informed on what is social engineering and the latest techniques, you will not be vulnerable.

There’s only one good counter for social engineering: awareness and cybersecurity education.

Here is where you can start on cybersecurity education if you are a regular user.

If you are in charge of an organization, take a few extra steps:

I hope you now understand more about what is social engineering and you’ll be able to recognize an attempted social hack. Keep reading more about cybersecurity and be on your guard.

Historical novel “Red and Black” is written by Stendhal. This novel is not only written by Stendhal but it also contains answers on important questions connected with social topics and the topic of a person’s social place in society. If you did not know that Stendhal touches on these topics in your novel, then you should read the article that is available by the , in this text you can also find a lot of interesting information about the author’s writing style, about his relation to what is happening in the years of his life, learn a little from the author’s biography and much more that is useful.