Dridex is back and it’s even stealthier than before

About two-three years ago, Dridex was the king of financial malware, making its creators millions by reusing and improving the leaked Zeus GameOver code.

Just how many millions?

$13.6 m Officials believe that the cybercriminals behind Dridex and Dyre defrauded Internet users of around $13.6 million, before getting arrested in November 2016. However, because this is a complex criminal operation, the ones that got caught last year were the money mules, not the creators of the malware themselves.

But the break didn’t last long, as Locky returned in surprising combinations, along with the Kovter click-fraud Trojan and using overlapping infrastructure with Sage ransomware.

Read about the latest malicious campaign that infects PCs with Dridex financial #malware:

As for Dridex, it also returned, with a new trick: it can now bypass Window’s UAC (User Account Control), thus increasing its stealthiest. This means that Windows won’t be able to trigger a security warning, thus alerting you that a piece of (in this case, malicious) software is trying to make unauthorized changes to your system.

How the current campaign unfolds

Through this new feature, Dridex is capable of automatically making changes to any system it infects, while the user remains unsuspecting.

In this current security alert, we explore the details of another spear phishing campaign that’s currently targeting Internet users and financial institutions in the United Kingdom.

This is one of a string of other similar campaigns that have emerged in the past month, whose main target was also the UK.

Would you open an email whose subject line is: “Your latest invoice is here”?

The current malicious campaign follows a well-know, but still effective recipe: an unrequested email claiming to include an invoice. The contents of the email are a brief phrase that says: “You can now see your latest invoice for your account.”

If this component opens, the system will be infected with one of the following Trojan downloaders: Madness, Votwup or QuantLoader. Their objective is to retrieve Dridex from the following URL (sanitized for your protection): http: // bog studio [.] Com / css / tsk.exe.

This Dridex strain immediately connects to a series of tier-1 C& C servers. Here is a sample:

Among other things, Dridex uses these C & C servers to download the various plugins, such as:

The plugins include the following components (sanitized for your protection):

At the moment when the campaign was analyzed, it has a detection rate of 9/56 on VirusTotal: 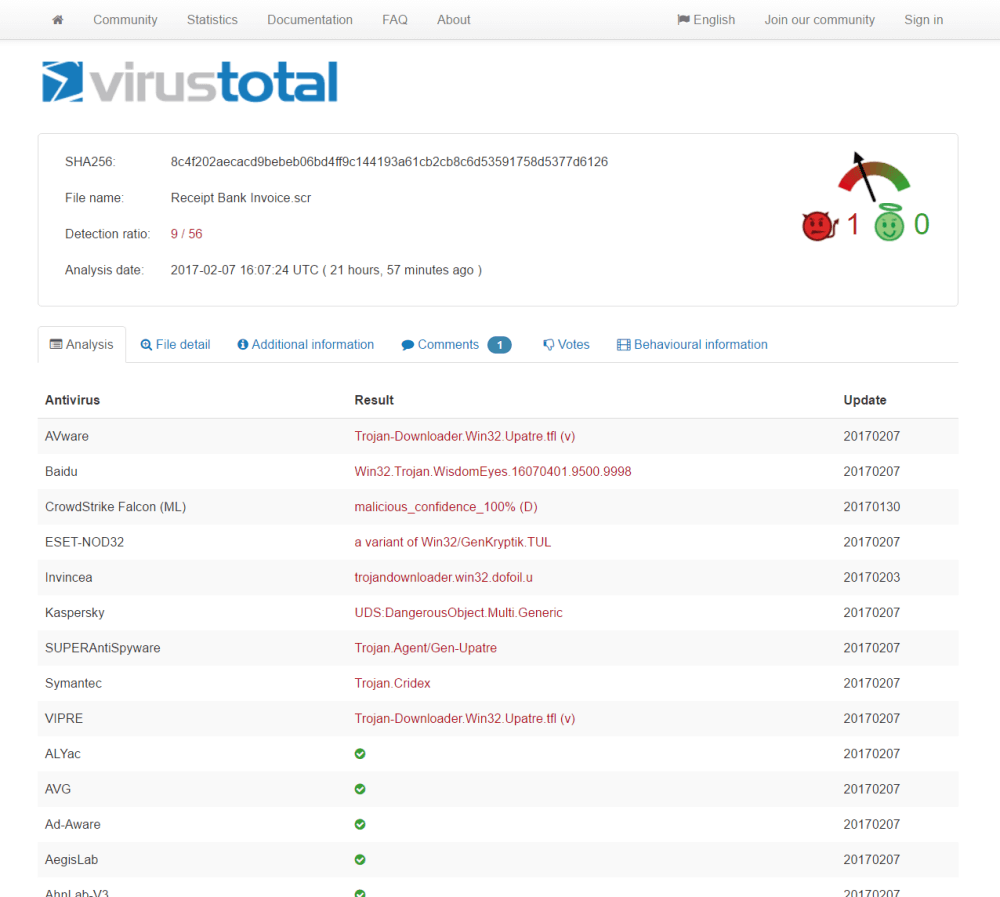 The objective is the same with Dridex: it still monitors the victim’s Internet traffic to spot banking websites and harvest login credentials and other account information.

If you’re unsure whether you’re protected against Dridex, this guide on maximizing your financial data security might be just what you need.

END_OF_DOCUMENT_TOKEN_TO_BE_REPLACED

Top 10: Most Dangerous Malware That Can Empty Your Bank Account [Updated]