A ransomware outbreak called “Bad Rabbit” is spreading quickly around the world, with the damage epicenter being in the Eastern Europe.

It has been reported that this ransomware strain resembles in many ways non-Petya/Petya, and has already hit major organizations in Ukraine, Russia, Turkey and Bulgaria by causing business disruption.

What’s new about Bad Rabbit is that it saves the collected information, and apparently misuses them in trying to spread in internal networks. This makes Bad Rabbit more powerful than predecessors (non-Petya/WannaCry) of the same type.

The infection is based on a fake update for Adobe Flash Player and dropped onto victims’ computers with a file named “install_flash_update.exe”.

After that, the dropper will be copied to “C: \ Windows \ infpub.dat” and try to start this dll file at “rundll32”. The method used in this attack is brute-force, as the malicious hackers will begin to force their way into the local network in order to spread the ransomware into victims’ computers. To achieve this, they will use a combination of commonly used usernames and passwords, until they try to figure out the correct one. 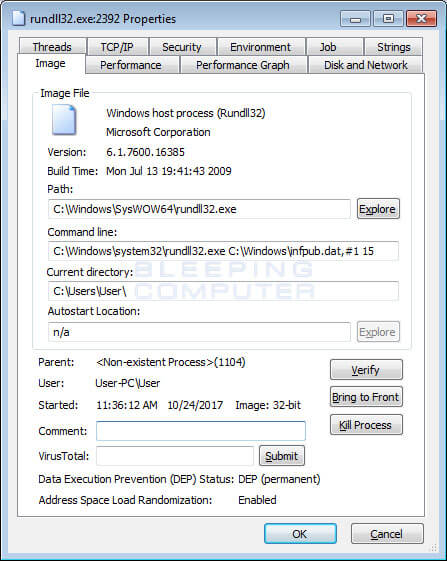 The legitimate program DiskCryptor (an open source disk encryption program) is then downloaded via the site http: // diskcryptor [.] Net and used as a tool for encrypting files on the victim’s computer.

When Bad Rabbit encrypts files, it will not attach a new extension to the encrypted file’s name. Instead, it will add the file marker string “encrypted” to end of every encrypted file. 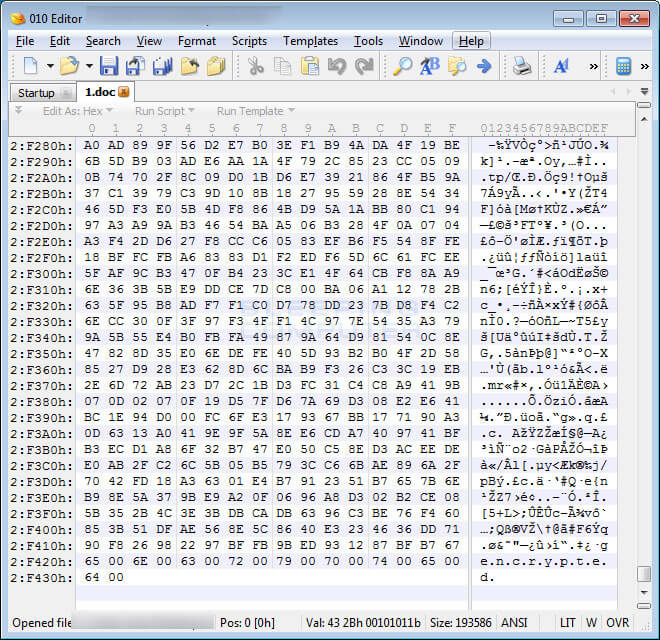 In order to mitigate the risk of infection with Bad Rabbit, we recommend you prevent the following files from being created and executed on your Windows endpoints:

Here’s how a task is displayed: 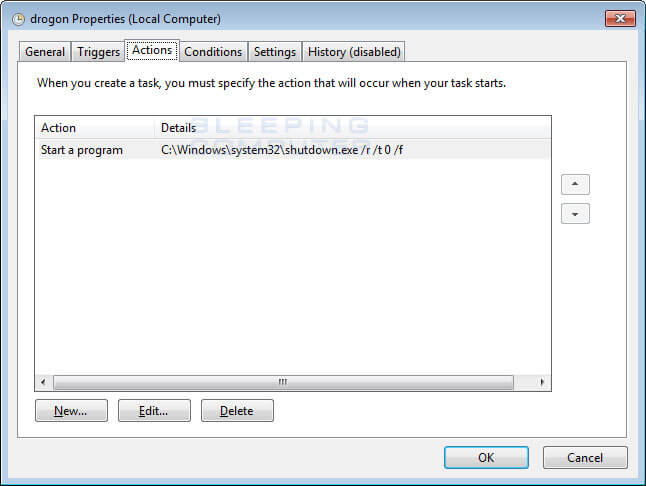 It then locks the computer, with no possibility for victims to access their data until a ransom is paid. When the job is completed, the following message will appear. 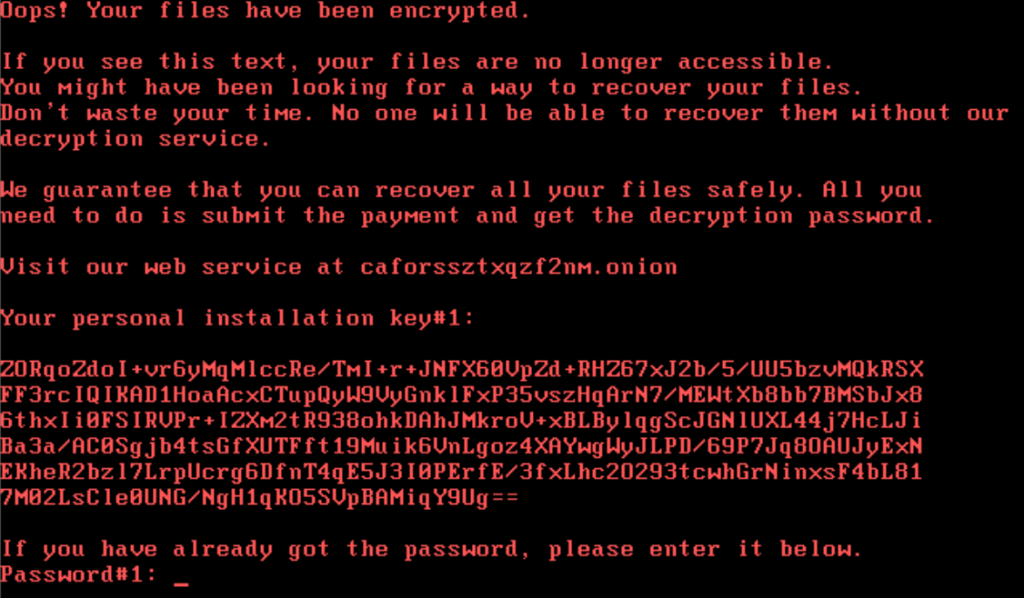 The malicious hackers behind this attack ask for 0.05 bitcoin as ransom, which is the equivalent of approximately $280.

The main purpose of these campaigns were to compromise financial information and other sensitive data.

“During these attacks, we repeatedly detected more powerful, quiet attacks that were aimed at obtaining financial and confidential information,” said Demedyuk.

Good news from the researchers at Kaspersky Lab team who analyzed the sample of this threat and discovered some flaws in the way online criminals have operated. Also, some users’ files encrypted by Bad Rabbit can be recovered by following a technical procedure including the AES key which is used for disk encryption.

“As part of our analysis, we extracted the password generated by the malware during a debugging session and attempted to enter this password when the system was locked after reboot. The password indeed worked and the boot-up process continued.”

Unlike Petya, Bad Rabbit is not destructive as a wiper. It encrypts information on the computer’s hard disk and modifies the bootloader by replacing the MBR (Master Boot Record). The ransom note also looks similar with the one used for (non)Petya attack.

It also differs primarily by spreading via Mimikatz (to extract credentials from the local computer’s memory) or via SMB and WebDav.

As it appears now, the distribution of Bad Rabbit has been done via malvertising or script injection, and most of these detections were reported on popular Russian and Ukrainian websites. ESET researchers also said there are reports of computers in Turkey, Bulgaria and other countries are affected.

VirusTotal showed that 55 of 66 antivirus solutions were detecting this type of malware at the time this article was posted. 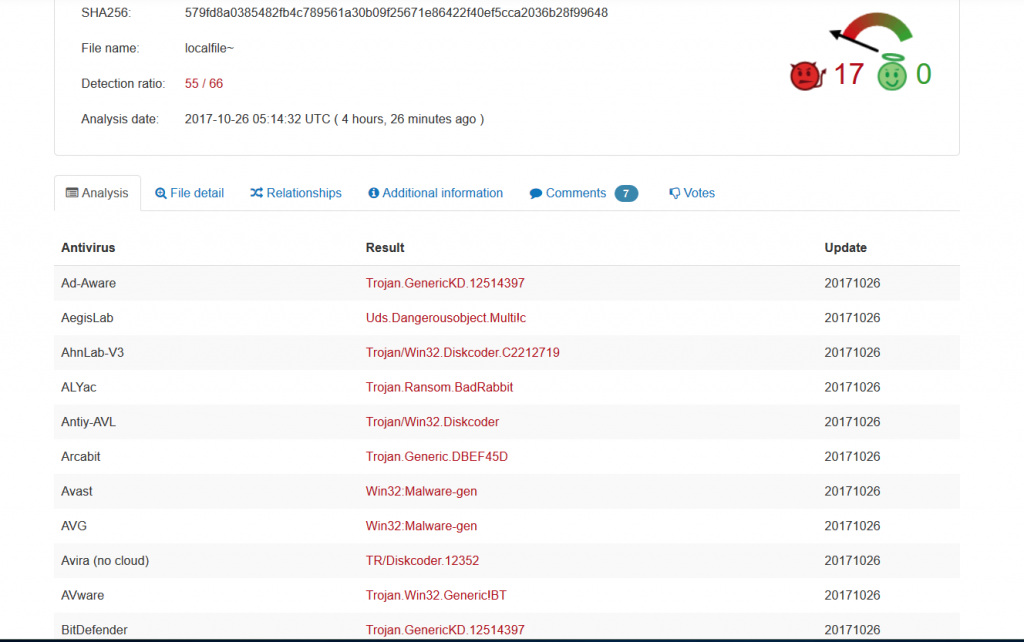 The bad news is that these ransomware strains spread fast and have (already) caused a lot of damage so far. Most of the targets are located in Russia with  65% distribution and infections detected, transportation organizations in Ukraine, such as the Kiev metro, the Odessa airport, as well as some governmental organizations and private businesses.

Similar attacks have been spotted in other countries: Ukraine, Turkey, Germany, Bulgaria, Poland, Romania and the United States as well. Here’s a map of Bad Rabbit attacks and global detection rate. 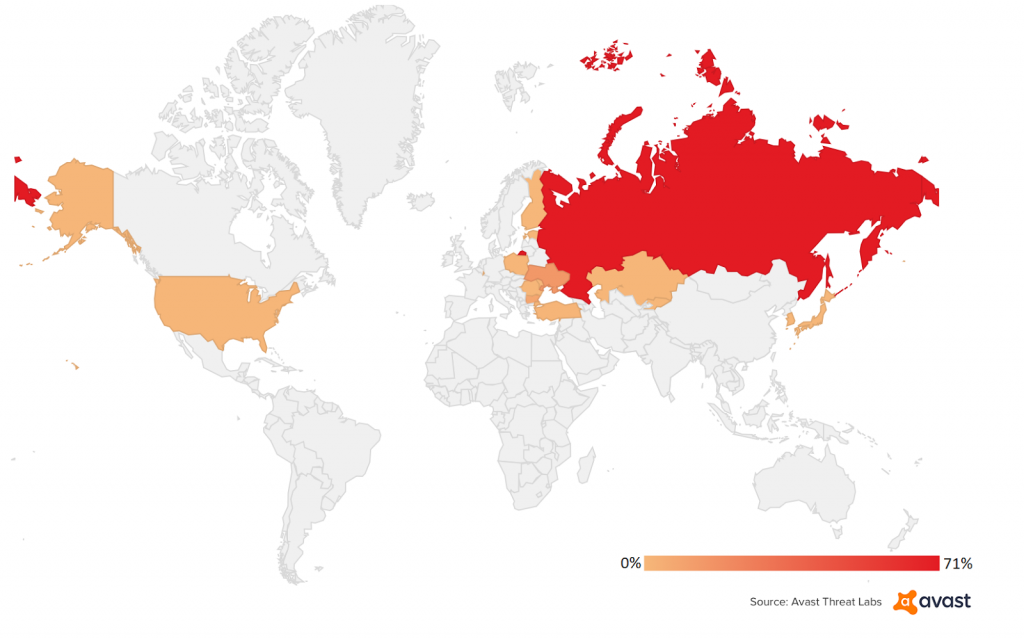 It might look like a nightmare scenario, but you should not panic. Remain calm, be proactive and take all the measures needed to protect your important data and stay safe online.

Security researcher Amit Serper found a simple way to prevent the distribution of Bad Rabbit and the infection on your computer. Create the following files in Windows –  c:\windows\infpub.dat & c:\windows\cscc.dat- remove ALL PERMISSIONS (inheritance).

If you are one of the victims of this ransomware attack, we strongly recommend not to pay the ransom. At this moment, there are no details if there’s any way to decrypt files locked by Bad Rabbit. However, there are some decryption tools out there that you can use/try. Also, this anti-ransomware checklist might help.

We recommend users to take the following protection guide against Bad Rabbit attack:

How mutch of the line ??

Hello Steen. Could you provide more details? We haven’t test it, this recommendation was given by Amit Serper, a security researcher. You may find something useful here and follow the instructions: https://twitter.com/0xAmit/status/922911491694694401 Also, If you’ve been infected with Bad Rabbit ransomware, we strongly recommend not to pay the ransom. Thank you and stay safe!