Spoofing: What It Is and How Can You Prevent It?

Spoofing is a type of cyberattack that involves assuming a false identity and manipulating a victim into disclosing sensitive information or granting access to their device. Cybercriminals win a victim’s trust by claiming to be a trustworthy individual or company in order to steal their data or obtain access to their equipment.

They accomplish this by changing their caller ID or email address. As part of various types of spoofing, threat actors make replicas of legitimate websites, conceal their IP addresses, and even broadcast false GPS signals.

How Does Spoofing Work?

As Michael Gregg points out in “Hack the Stack”, there are two types of spoofing attacks. The first is local spoofing, which occurs when the attacker and the victim are on the same network. This is by far the easiest of the two sorts of spoofing attacks we’ll explore. The attacker has the ability to sniff network traffic and so gain access to essential pieces of information needed to carry out the attack. While some of the techniques used to launch this type of assault take place at the transport layer, it’s vital to remember that attackers will corrupt the data stream, spoof addresses, and try to inject sequence numbers into packets to acquire control of the communication session.

Blind spoofing is the second method through which this attack can be carried out. This is a far more advanced and sophisticated attack. The attacker is not on the same local subnet when the assault is initiated this way. This means that many of the bits of information needed by the attacker to succeed aren’t available. These crucial parameters must be estimated. Because most modern operating systems employ very random sequence numbers, this type of attack is difficult to carry out. The apex of these attacks has passed, yet they are still viable to launch.

Spoofing comes in a variety of forms, each with its own approach and aim.

Domain spoofing involves impersonating the domain of a well-known website. Unfortunately, many businesses are unaware that it is a problem to be aware of, let alone recognize it when it occurs. Despite the fact that the number of domain spoofing assaults appears to be decreasing, there is no certainty that they will ever go away.

So, what happens when threat actors impersonate an organization’s domain? The company’s clients are duped into providing personal information on a fake website, putting their digital privacy and security at risk. 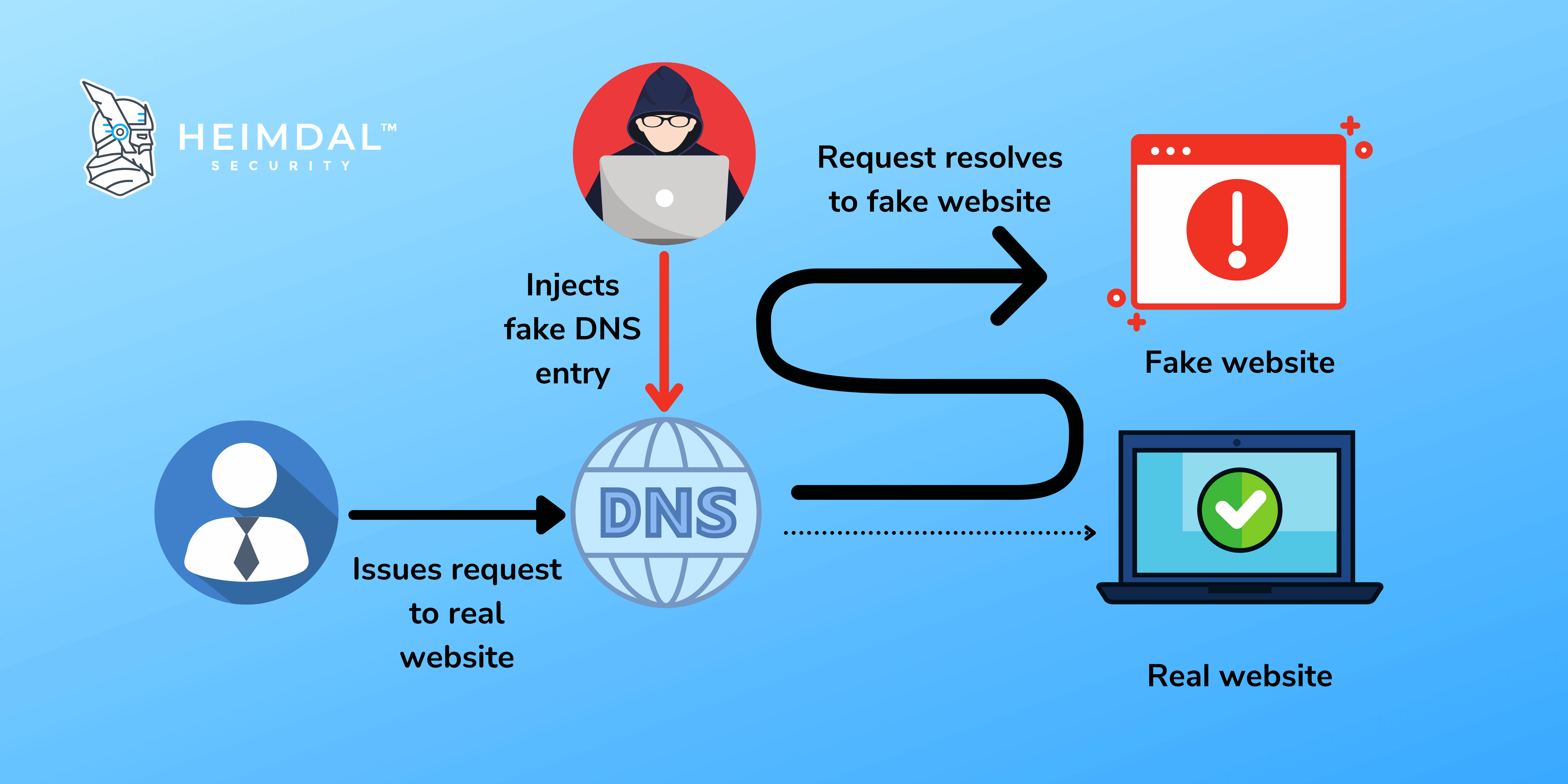 A DNS spoofing attack can be carried out in a variety of ways, including:

This is a common type of spoofing attack that is generally used in conjunction with spoofed emails that provide links to the site. Designing a phony website that closely mimics a trusted or even well-known website is known as website spoofing. The majority of faked websites will have a login page where victims will be asked to submit their passwords or other sensitive data. Malware can also be distributed via spoofing websites. Spoofing a website can have serious ramifications for a company’s data privacy and integrity.

This is the most prevalent type of spoofing, in which victims are targeted by email. With an email address that closely resembles the original, the sender appears to be a reliable source. Adware, ransomware, Trojans, cryptojackers, and malware can all be distributed using spoof emails. While most users have refined their email usage to the point that they can spot a fake email address right away, faked emails are increasingly employing a variety of deceptive tactics. These could include closely resembling a well-known email domain or address with minor changes. Logos, iconography, and other trusted and recognized branding elements may also be used in the emails. Spoofed emails that are more targeted can include familiar messaging or an address that is directed to a particular person or a group of people.

There are rather obvious reasons for email spoofing. Typically, the threat actor has malicious intent, such as stealing a company’s proprietary data. The following are the most typical causes of malicious behavior:

IP Spoofing, which is commonly used in distributed denial of service (DDoS) attacks, is a pernicious attack that prevents malicious traffic from being removed while concealing the attacker’s location. Because the IP address of a device is frequently utilized in security systems to verify a user’s location, hackers can employ IP Spoofing to hide their identity and avoid detection even by advanced security systems.

Since IP spoofing is so difficult to detect, it is a serious threat to keep in mind. This is due to the fact that IP spoofing occurs prior to a hacker attempting to get access to a system or interacting with an unwitting victim.

Take into account the following consequences of this challenging detection:

ARP (Address Resolution Protocol) is a collection of rules that links IP addresses to physical devices. ARP spoofing is the act of imitating this piece of data in order to get around security procedures such as antivirus software. Malicious actors can employ ARP Spoofing to link their computers to a genuine user’s IP address. If the user is an employee of an organization, attackers can acquire access to the network by obtaining his or her login credentials. Because the connection looks to be legal, the network’s security systems will be unable to detect the difference.

Threat actors can alter or fake the MAC (Media Access Control) address by exploiting vulnerabilities in hardware drivers. This allows the attacker to make his device appear to be part of the target network, allowing him to evade all access restrictions. In essence, MAC Spoofing allows hackers to impersonate trustworthy users in order to commit frauds such as business email compromise (BEC), data compromise/theft, or malware distribution into previously safe environments.

Have you ever received a call that you thought came from a reliable source but turned out to be spam? That’s exactly the definition of Caller ID Spoofing, a technique in which the phone call looks to come from a reliable source. Once you answer the phone, the attacker can utilize social engineering techniques, such as acting as a member of your bank’s customer service staff informing you of a crisis. The goal of Caller ID Spoofing attacks is usually to elicit important information from the user, such as financial information, passwords, Social Security numbers, and so on. 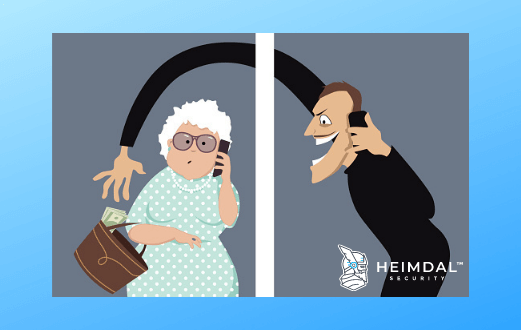 Mobile Spoofing is similar to Caller ID Spoofing in that threat actors send an SMS using someone else’s phone number or sender ID. The hacker is attempting to conceal his real identity by using an alphanumeric sender ID. The sender appears to be from a reputable/legitimate company or organization. Text Message spoofing is another term for mobile spoofing.

Threat actors can use GPS spoofing to make it look as if they are at a specific area while they are actually somewhere else. Attackers frequently employ this type of spoofing to hide their true identity while committing more serious forms of cybercrime. GPS Spoofing can also be used to send commuters to the wrong locations by manipulating automobiles that use GPS input.

In this type of spoofing attack, the threat actor stores a file as an executable one that appears to be a simple text file to the untrained eye.

Malware that uses social engineering techniques is well-known for its ability to disguise itself as a non-obvious executable. Malicious attachments are provided in the form of specially created icons that look like legitimate document files. Furthermore, they frequently employ double extensions, such as “.pdf.exe” or “.doc.exe,” taking advantage of the fact that Windows hides the extension by default, making it difficult for users to tell which file is the one it claims to be.

They also use lesser-known executable format extensions, such as “.scr.”

How to Stay Safe from Spoofing?

You can file a complaint with the FCC’s Consumer Complaint Center if you believe you were a victim of a spoofing attack. If you’ve lost money due to spoofing, you can also inform your local police station. Check out our antivirus software to defend yourself from spoofing and secure your digital assets today.