Locky Ransomware 101: Everything You Need to Know

What Is the Locky Ransomware?

Locky Ransomware is a piece of malware that encrypts important files on your computer, rendering them inaccessible and unusable. It holds them ‘hostage’, and in the meanwhile, demanding a ransom payment, in exchange for the encrypted files.

How Does Locky Ransomware Work

Locky ransomware is usually distributed via email, using social engineering techniques to spread the malicious code. The massive email campaigns were spearheaded by the so-called Necurs Botnet, which was considered one of the largest botnets before it went dormant. Necurs primarily distributed the Locky ransomware and the Dridex banking Trojan in its spam emails.

The most commonly reported infectious mechanism of Locky involves receiving an email with a Microsoft Word document attachment that contains the code. The document is gibberish and prompts the user to enable macros to view the document. to prime Locky’s payload. Once the virus is deployed, it will get loaded into the system’s memory. After that, it will begin encrypting documents, renaming them as hash.locky files. In addition, Locky installs .bmp and .txt files, and will encrypt network files that the user has access to.

This has been a different route than most ransomware since it uses macros and attachments to spread rather than being installed by a Trojan or using a previous exploit.

Locky variants have used a number of different file types in order to trigger the infectious process including:

When the computer gets infected, you would typically see a ransom note displayed either as a desktop wallpaper or a text file, just as seen on the picture below. 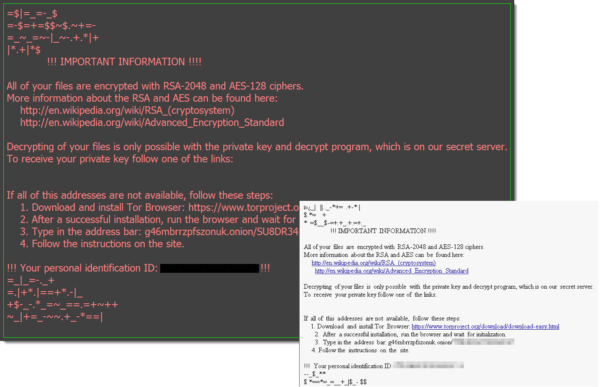 The owner of the computer or company would have to act on the following note, to get their valuable files back.

History of the Locky Ransomware and Known Variants

Locky ransomware was first discovered in 2016, and quickly became one of the most significant malware threats on the Internet. Locky is currently out of commission, but other variants of the Locky ransomware have emerged.

More about Known Variants of the Locky Ransomware Family

Locky’s Lukitus strain was first spotted in august 2017, by the Malware researcher Rommel Joven. He warned that the Lukitus was being distributed via e-mail attachments, as a part of a huge spam campaign, run by the Necurs botnet, also used by Locky ransomware. Lukitus means “locking” in Finnish very close to Locky, and the two of them definitely have their similarities. As with previously seen versions of Locky, “the spam emails distributed in this campaign include an attached archive file (.zip or .rar) that contains a malicious JavaScript or VBS script.

Locky Ransomware has been used to target all sorts of businesses, but Healthcare has been the no. 1 target. The hackers send out an e-mail campaign targeting all the computers that they can find at the hospitals, hoping that just one person will open up the malicious attachment. Hospitals are usually targeted by hackers because of their less secure patient data storage practices. On top of that, it puts them in a very critical position if they don’t retrieve patient data. The graph below shows what industries got hit the most by Lucky ransomware in August 2016.

On February 18, 2016, the acute-care facility Hollywood Presbyterian Medical Center paid a $17,000 ransom in the form of bitcoins for the decryption key to get their patient data back. The Hospital’s network was compromised by an email attachment disguised as a Microsoft Word invoice. The disruption caused emergency rooms and treatments to be affected, as the patient data is crucial for treating patients.

How to Stay Safe from Locky Ransomware

#1. Protecting Your Enterprise from Locky Ransomware

The best way to protect your organization from the devastating effects of Locky ransomware attacks is to prevent malware from entering your system in the first place. A broad approach to security is what we recommend.

A good antivirus is essential for the cybersecurity of any company, but not enough. To be fully protected, we recommend you choose a powerful tool that can offer DNS filtering, real-time scanning, traffic-based malware blocking, and multi-layered AI-powered protection. You can also consider our Endpoint Prevention, Detection and Response (EPDR) platform – a multi-layered security suite that brings together threat hunting, prevention, and mitigation in one package, for the best endpoint protection.

Many hackers rely on you not paying attention to what your emails actually contain and hope you’ll get infected by opening a malicious attachment or clicking on a fake link (see Locky’s MO). Pay attention to the links you want to access to make sure they lead where they’re supposed to and never open attachments or access links received from unknown, unexpected, or unwanted sources. You should also think about an email protection solution, like our Heimdal™ Email Security.

When protecting your home from attacks like those from the Locky family, it’s important to know that your firewall alone can’t protect your devices. You need to protect your digital life thoroughly. It’s just as important to have an all-around security solution at home as you do at your workplace, especially in this pandemic, where most of us are working from home. We recommend Heimdal™ Premium Security Home to take care of this task, as it brings the unique threat prevention layer of Heimdal™ Threat Prevention Home on top of flawless, market-leading detection. Heimdal™ Next-Gen Antivirus Home stops ransomware, data leakage, viruses, APTs, exploits & other advanced online threats.

How to act if encrypted by The Locky ransomware family?

Though this seems like a good idea, when you are desperate to get back control of your machine by paying the ransom, we never encourage people to do so. There are no promises that you actually will get your files back from the cybercriminals and giving them money only motivates them to go forward and keep on doing what they do. Take a look at what the FBI says about the matter.

“The FBI does not advocate paying a ransom, in part because it does not guarantee an organization will regain access to its data. In some cases, victims who paid a ransom were never provided with decryption keys. In addition, due to flaws in the encryption algorithms of certain malware variants, victims may not be able to recover some or all of their data even with a valid decryption key.

Paying ransoms emboldens criminals to target other organizations and provides an alluring and lucrative enterprise to other criminals. However, the FBI understands that when businesses are faced with an inability to function, executives will evaluate all options to protect their shareholders, employees, and customers.”

The Locky uses RSA-2048 + AES-128 cipher with ECB mode to encrypt files. Keys are generated on the server-side, making manual decryption impossible, and Locky ransomware can encrypt files on all fixed drives, removable drives, network, and RAM drives. But the original Locky ransomware is obsolete, therefore you must look into what kind of Locky variant you are dealing with, and find the decryption key that works for that.

For more info on how to find out the type of ransomware you’re dealing with, and if there is a decryptor available, check this Ransomware Decryption tools article.

There is a free decryption key for the PowerLocky ransomware made by Michael Gillespie.

In the world we live in today, it is crucial to know the threats that live among us. We can no longer sit back and wait until something happens, because that may be too late. We need to be proactive and learn more about it, else hackers will forever be able to compromise our devices and steal our information. And when it comes to ransomware like the Locky, it is no different, make sure that you and your company have taken the right precautions, to stay ahead of the hackers, and stay safe!

Make sure to leave a comment below and tell us how you secure your company and home from the threatscape out there.