During the course of a larger cybercrime investigation regarding attack & exfiltration methodologies, Heimdal™ Security’s SOC team has discovered that although cyberattacks have increased in volume, the odds of success have dramatically decreased. In analyzing the trendlines pertaining to successful vs. unsuccessful cyber-aggressions in the context of volumetric inflation, Heimdal™ has aggregated data from all available detection grids (i.e. anti-ransomware encryption protection, antivirus, brute-force guardrails, DNS traffic analyzer, and email protection). In this article, we will take a closer look at the leverage telemetry and define a contextual relationship between volume increase and the plummeting cyberattack success rates.

A subsequent breakdown of the attack by surface reveals that a staggering 71.8% (5,004,686) of the registered aggression has been carried out by email (i.e. phishing, spearphishing, Business Email Compromise, Vendor Email Compromise, CEO fraud, etc.). The values related to the remaining attack surfaces are as follows:

For a broader understanding of this data and the result of Heimdal™’s evaluation, we must factor in additional statistics regarding attack success probability:

Data-gathering efforts began on the 31st of May 2021, with a halt on the 31st of October 2021. MoM (month-over-month) volumetric variances are as follows:

Additional details are taken into consideration:

From a statistical point of view, given the surge in volume, we ought to have more cases of data breaches, illegal data exfiltration, and ransomware-type activity. However, Heimdal™’s assessment proves the exact opposite – fewer odds of impact, despite visible volumetric growth. To understand the reasoning behind this statement, we shall deep-dive into the methodology our team has applied in this case study.

The obtained values would be multiplied with its corresponding probability rate, the result being divided by the max threshold value of the attack thought to have the highest success probability (i.e. ransomware). Risk results are expressed as quantiles.

Below, we have redacted our risk assessment scores (RA) for each month.

See the graph below to review the MoM variation of RA scores.

As you see from the above graph, according to Heimdal™ detection telemetry, the risk score registered a steady rise in the May-August timeframe. The score plateaued in the August-September timeframe with a distinguishable (and steady) decrease in September and October.

The steady decline in risk score is more than observable and, as mentioned before, takes place in the context of an ‘across-the-board’ volumetric increase. These numbers have been redacted in the table below.

….and MoM variations are as follows: 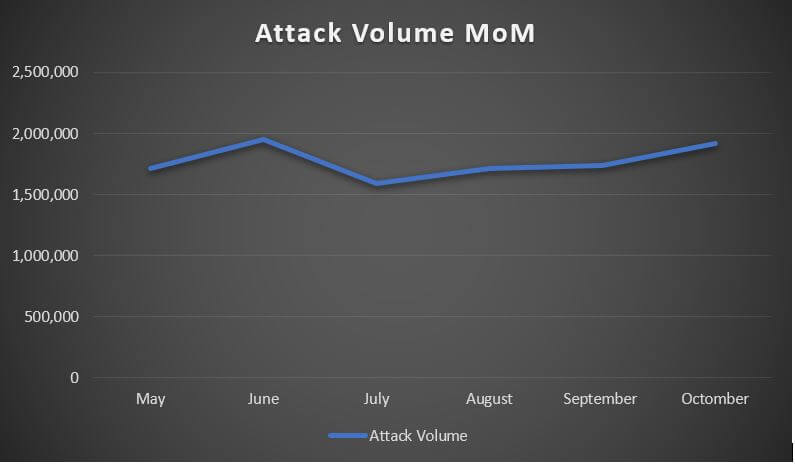 The decline in attack success vs. attack volume becomes even more visible when the two graphs overlap (see figure below). 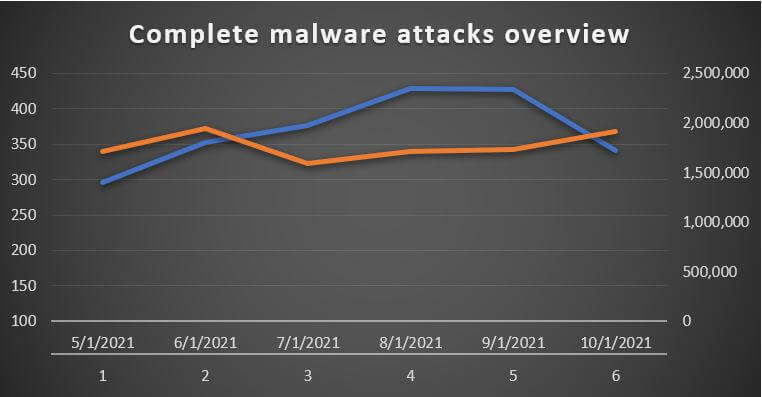 With this information on the table, we can make the following inferences:

The data gathered and curated by Heimdal™ Security proves, beyond a shadow of a doubt, that the defender has slowly begun to win precious ground when faced with attackers. Despite the large volume of ransomware, DNS, AV, email, and BFA attacks, the odds have dramatically decreased if we compare them to those recorded.

However, we should also take into account the fact that a large number of attacks may just be a part of a larger, defense-probing scheme, orchestrated by one or more threat groups. Evidently, the telemetry supplied by Heimdal™ Security should be taken with the proverbial grain of salt – just because the defenses hold up, for now, it doesn’t mean that we should abandon our stand. To that end, before we conclude this article, let’s talk about some additional cybersecurity countermeasures you may want to implement in order to further decrease the risk of a successful attack:

As always, stay safe, avoid malicious websites or links, and don’t forget to subscribe to Heimdal™’s newsletter for more awesome news. If you enjoyed this article, because we know that you surely did, don’t forget to follow us on Linkedin, Twitter, Youtube, or Instagram to never miss a thing we post.