Govt Agencies and Banks in Ukraine Targeted in DDoS Attacks

According to the Ukrainian Government, Specialists Are Taking All Necessary Steps to Fight Against this Type of Threat.

What Is a DDoS Attack?

As explained by my colleague Elena, DDoS refers to an online attack in which legitimate users are prevented from accessing their target online location. This is usually done by flooding that particular website with a multitude of illegitimate information requests.

This type of cyberattack can have serious consequences as it affects customer experience, revenue, workflow, and brand image.

According to BleepingComputer, Ukraine’s Cyberpolice also announced yesterday that bank customers received SMS claiming that bank ATMs were unavailable, adding that they were “part of an information attack and do not correspond to reality.”

Starting from the afternoon of February 15, 2022, there is a powerful DDOS attack on a number of information resources of Ukraine.

In particular, this caused interruptions in the work of web services of Privatbank and Oschadbank. The websites of the Ministry of Defense and the Armed Forces of Ukraine were also attacked. 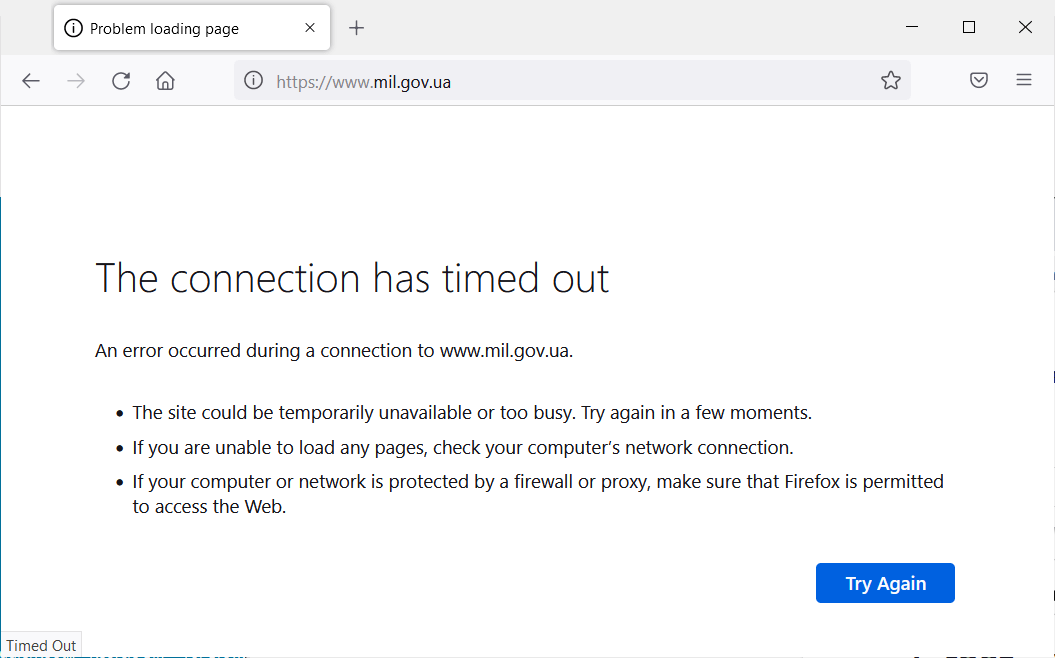 While the Ukrainian defense ministry’s website is down, Oschadbank and Privatbank’s webpages are still up and running, though users are unable to access their online banking accounts.

The Ukrainian Center for Strategic Communications and Information Security declared that Privatbank users:

As explained by BleepingComputer, a traffic geofencing rule was added to Privatbank’s web application firewall (WAF) automatically removing the website’s contents for IP addresses outside of Ukraine and displaying a “BUSTED! PRIVATBANK WAF is watching you)” notification.

Why Is Ukraine Being Targeted?

Earlier this week, the Security Service of Ukraine (SSU) declared it believes that Ukraine is subjected to a hybrid warfare campaign meant to induce fear and weaken public faith in the government’s capacity to protect its population.

The agency also stated that it has already thwarted numerous such attempts connected to hostile intelligence agencies, as well as dismantled bot farms aimed at instilling fear in Ukrainian citizens through bomb threats and false information.

One day later, the SSU announced that it had stopped more than 120 attacks aimed at Ukrainian state institutions in January 2022.

Protect yourself from DDoS attacks with Heimdal Threat Prevention, the solution that allows you to easily leverage a Host-Based Intrusion Prevention System (HIPS), augmented by a highly intelligent threat detection technology powered by AI.

The innovative AI will detect and block the infected domains, allowing you to enjoy peace of mind when thinking about your business ecosystem.

Is Ukraine the Target of a Hybrid Warfare?

What Is a Smurf Attack, How Does It Work and How to Prevent It