External Penetration Testing: What It Is And Why You Should Care

Learn How to Identify Vulnerabilities that Attackers May Exploit.

An external penetration test is a type of security assessment that simulates the activities of real-world attackers to assess the resiliency of your organization’s network perimeter.

It is widely regarded as one of the first types of assessments that most organizations will undergo, as most are concerned with addressing their Internet-facing weaknesses first.

That makes sense because you don’t want just anyone to breach your perimeter security, allowing unauthorized access to applications, sensitive data, or, worst of all, an underlying host server.

Here’s an illustration of what external penetration testing looks like: 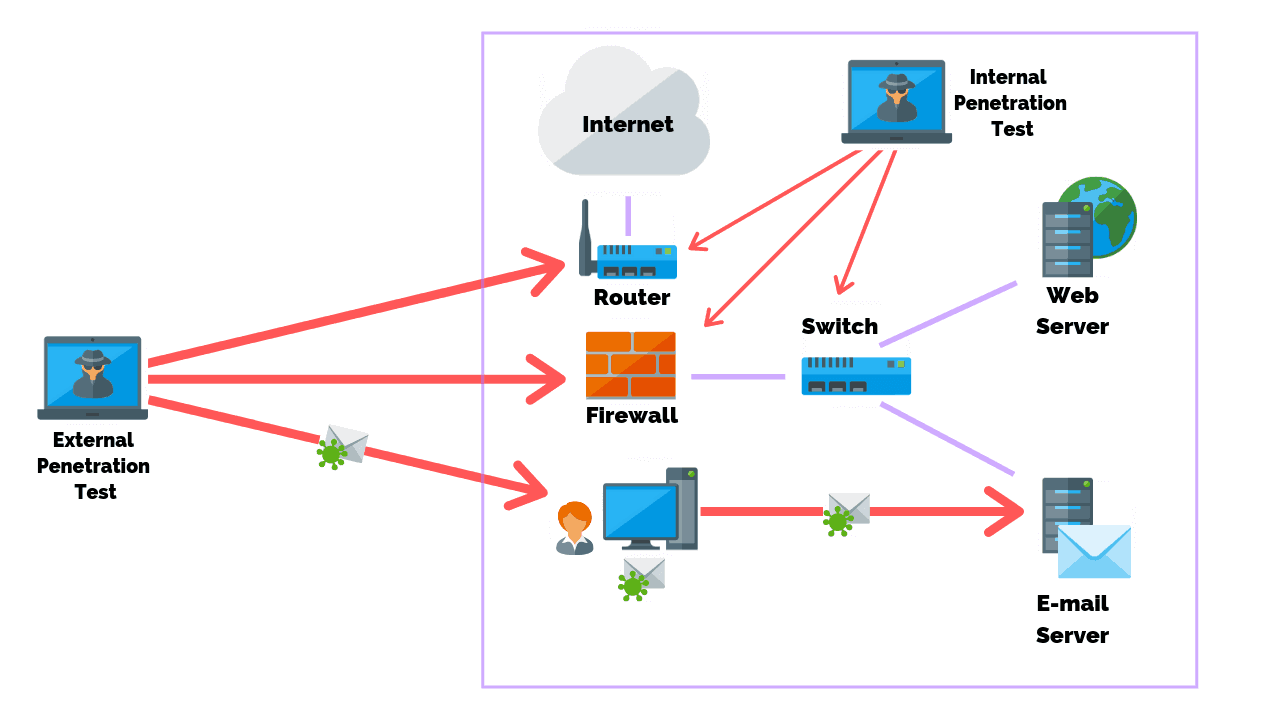 In an oversimplified definition, an external penetration test seeks to find vulnerabilities that aren’t immediately apparent. With this knowledge, you can take precautions to reduce these vulnerabilities’ risks and ensure they are minimalized.

Why Is Penetration Testing Important?

One of the main reasons penetration tests are important to an organization’s security is that they help personnel learn how to handle any break-in from a malicious entity.

In addition, pen tests serve as a way to examine whether an organization’s security policies will be effective. They can be thought of as fire drills for organizations.

Penetration tests offer solutions that help organizations not only to prevent and detect attackers but also to expel them from the system effectively.

What Does an External Penetration Test Entail?

So, we’ve already mentioned that penetration testing is a way to see what would happen if someone tried to hack your system. This is sometimes called a “mock drill,” and it provides a third-party perspective on the security of your project.

External penetration testing can be broken down into a 5-step process, which is as follows:

The penetration testing process’s first step is defining the scope and target. You also need to choose what type of pen test you’ll be conducting.

The testing process usually starts with understanding the testing assets. A roadmap for the entire process is also defined, including deploying diverse techniques and penetration tools.

It analyzes running codes and provides automated analysis of performance to identify inefficiencies.

This is the final stage of a penetration test. In this phase, the tester exploits error-prone systems with various unconventional attacks.

White hat hackers are talented and skilled at hacking into websites to see if they can be breached or hacked. They access your site through web application attacks and try to break in, steal data, or do many other things. By locating vulnerabilities on your site, web testers can assess the potential damage these exploits could cause.

Many different tools are used for software and network testing exploits. Each one is used for specific projects and depending on the needs.

A compilation of all the penetration test findings and results are compiled into a comprehensive report, including:

Making the required changes in the code is at the heart of this step. This process involves developers making modifications based on new vulnerabilities detected in a pen test.

Once the code has been refactored, it is then reviewed by the testers to confirm that the tested code is operating as intended.

When organizing your external penetration test, consider the following:

If you know what vulnerability scanning is, you’ll find that an external pen test shares some similarities.

But let’s see what’s the difference between the two.

External penetration testing is an in-depth security assessment but only begins with a full external vulnerability scan. After that, the pen tester will investigate all of the output manually to remove false positives and run exploits to verify the extent/impact of any vulnerabilities found. They’ll also chain together multiple weaknesses to produce more impactful exploits.

On the other hand, vulnerability scanners may report that a service has a critical weakness, but a pen test would try to exploit the flaw and gain control over the system. If successful, the pen tester would use their access to go even further and compromise other strategies and services.

To summarize, vulnerability scanning is similar to problem detection. It’s an automated technique for detecting possible vulnerable bugs in the system, while penetration testing not only detects but also exploits those vulnerabilities using external pen testing tools. This evaluation determines the extent of the security issues caused by them.

What Are the Three Penetration Testing Methodologies?

There are three penetration test techniques, and they all accomplish the same goal.

A black-box penetration test identifies computer security flaws that can be exploited outside the network. The tester must also make use of dynamic analysis techniques to do this.

On the downside, if testers can’t breach the security perimeter, internal vulnerabilities could go unfixed.

White box, or open box testing, is the opposite of black box testing. Pen testers can examine every aspect of a system’s internal workings and intended behavior to find bugs that have gone unnoticed. They can also use a static analysis tool that searches for problems in the code from the computer’s memory.

Grey-box testing chooses to provide some user information, like a middle ground between the black and white boxes. As a result, they share less detailed knowledge than a white-box tester but offer more than the black-box alternative.

An external network pen test can be hugely beneficial when assessing your current cybersecurity defenses. To simulate a malicious attack approach, the team would take on the role of an outside hacker and try to figure out what you’re missing.

The takeaway? They find gaps in your current security so that you then know where to plug them.