The IT Sector Targeted by Iranian State Cybercriminals, Microsoft Says

According to Microsoft, the Hacker’s Goal is to Steal Sign-in Credentials From Downstream Client Networks to Launch New Attacks.

Microsoft declares that Iranian cybercrime organizations have been trying to breach IT services businesses more frequently this year to collect credentials that they could further use to compromise the networks of downstream customers.

According to cybersecurity experts at Microsoft Threat Intelligence Center (MSTIC) and Digital Security Unit (DSU), this operation is part of a larger espionage strategy to hack organizations of interest to the Iranian government.

This activity is notable because targeting third parties has the potential to exploit more sensitive organizations by taking advantage of trust and access in a supply chain.

According to BleepingComputer, more than 1,600 notifications were sent by Redmond to over 40 IT services organizations, alerting them of hacking attempts conducted by Iran-based Advanced Persistent Threat (APT) gangs. When compared to 2020, when Microsoft only sent 48 notifications throughout the year, we notice that it has been a significant increase. 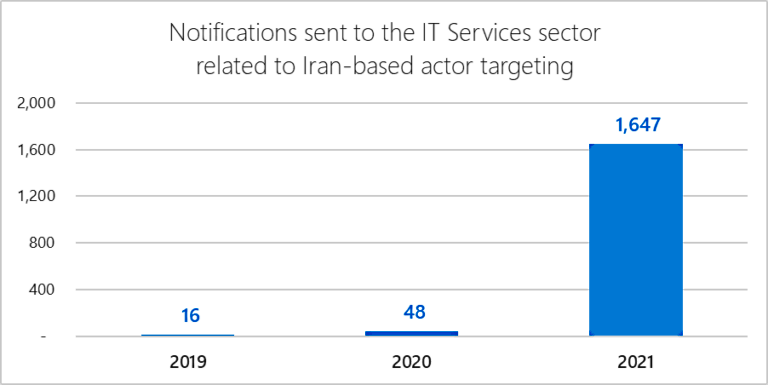 The majority of these attacks target Indian IT services companies, with a few of them also focusing on organizations located in Israel and the United Arab Emirates.

As per Microsoft, in July and September, two Iranian cybercrime gangs known as DEV-0228 and DEV-0056 managed to compromise organizations in the IT sector in Israel and Bahrain.

In July 2021, a group that MSTIC tracks as DEV-0228 and assesses as based in Iran compromised a single Israel-based IT company that provides business management software. Based on MSTIC’s assessment, DEV-0228 used access to that IT company to extend their attacks and compromise downstream customers in the defense, energy, and legal sectors in Israel.

In September, we detected a separate Iranian group, DEV-0056, compromising email accounts at a Bahrain-based IT integration company that works on IT integration with Bahrain Government clients, who were likely DEV-0056’s ultimate target. DEV-0056 also compromised various accounts at a partially government-owned organization in the Middle East that provide information and communications technology to the defense and transportation sectors, which are targets of interest to the Iranian regime. DEV-0056 maintained persistence at the IT integration organization through at least October.

Lately, multiple advisories and reports have warned of Iranian operations targeting companies around the world, with the Iran-based threat actors getting a great deal of public attention.

The FBI, CISA, ACSC, and the United Kingdom’s National Cyber Security Centre recently warned of a state-backed Iranian hacker who has been using various CVEs to establish a foothold within networks before moving laterally and unleashing BitLocker ransomware, and other malicious tools including both critical Fortinet vulnerabilities and a Microsoft Exchange ProxyShell flaw.

Earlier this month, the Federal Bureau of Investigation (FBI) issued a warning for private business partners about an Iranian cybercriminal’s attempt to purchase stolen data belonging to the US and international companies.

The federal law enforcement agency stated that attackers will probably use stolen material such as email messages and network information purchased from clear and dark websites to compromise the systems of related organizations.

Iranian Cybercriminals on the Lookout for Data Stolen from US Companies, FBI Says