They Use Improved Evasion Methods.

The ones who created Purple Fox malware have upgraded their malware arsenal, as currently, they are using a new FatalRAT version, a remote access trojan. Besides, its functionalities to avoid detection have been also upgraded.

Experts from TrendMicro have recently published a report on this topic emphasizing what’s the purpose of this new RAT version.

The findings are based on previous Minerva Labs research that revealed a similar method of distributing the backdoor via phony Telegram applications. WhatsApp, Adobe Flash Player, and Google Chrome are among the other disguised software installs, as hackernews.com mentions.

How Does the Infection Chain Unfold?

According to the same report by TrendMicro, in the Purplefox infection chain, a single character is included in the installers, that matches a specific payload. The execution parent then adds the second stage payload as a single character to the first stage command and control (C&C) server’s request.

An illustration of the infection chain is shown below. 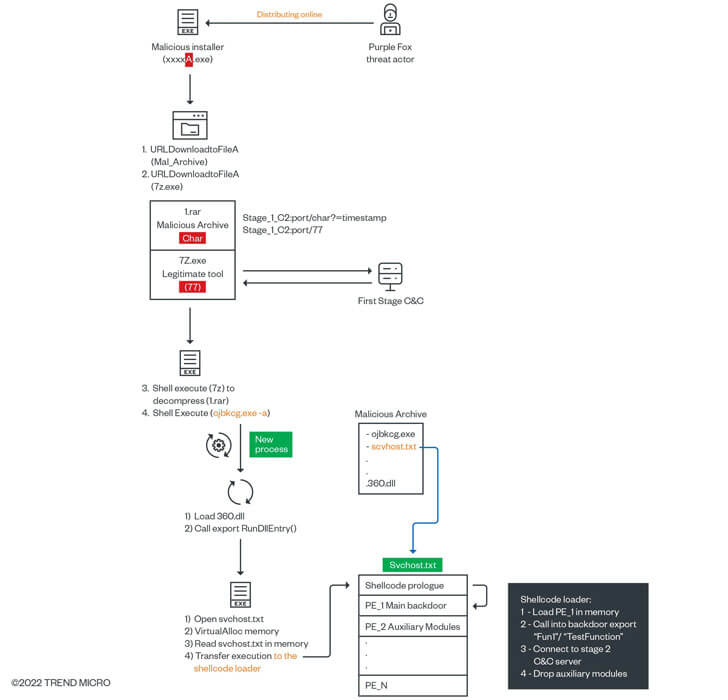 Which Tools Is Purple Fox Using

The report further talks about the tools employed by PurpleFox:

A set of portable executable (PE) modules discovered in one of the malware’s most widely deployed clusters featured a wide variety of AV evasion capabilities.

FatalRAT Is Leveraged During the Process

After the shellcode loads and allocates memory for the PE modules inside svchost.txt, the execution flow will call into the first PE module found after the shellcode. This is a remote access trojan (RAT) that inherits its functionality from a malware known as FatalRAT, a sophisticated C++ RAT that implements a wide set of remote capabilities for the attackers.

FatalRAT stands for a C++-based backdoor meant to conduct commands and exfiltrate sensitive data to a remote server, with the malware writers gradually adding new features to the backdoor.

The RAT is responsible for loading and executing the auxiliary modules based on checks performed on the victim systems. (…) Changes can happen if specific [antivirus] agents are running or if registry keys are found. The auxiliary modules are intended as support for the group’s specific objectives.

FatalRAT in Full Play: the New Trojan that Targets Telegram