The Threat Infects Windows Devices with a Dozen Malware Families.

A new malware named “NullMixer” is making waves as it infects Windows devices with a dozen different malware families simultaneously. The malware is infecting devices through fake software cracks promoted on malicious websites on Google Search.

How the Malware Spreads?

According to BleepingComputer, the distributors of the malware are using “blackhat SEO”, to display the websites hosting the fake cracks and software activators in high search positions on Google. The news outlet tested the claim by searching for “software crack” on Google’s search engine, and many of the sites said to be distributing the malware were highly ranked in search results.

When unaware users try to download software from these websites, they are instead taken to other malicious websites that drop a password-protected ZIP archive with a copy of the NullMixer dropper. Users downloading cracks typically ignore AV warnings since they frequently need to edit game files.

Typically, NullMixer is downloaded as files with names that sound like “win-setup-i864.exe,” which, when run, produce a new file called “setup installer.exe.” The newly produced file then triggers a chain reaction which allows the malware to infect the machine. The file launches another executable called “setup_install.exe”, which then launches a third file. This third file is the one launching all the malware in the compromised machine, by using a hardcoded list of their names and the Windows’ “cmd.exe” tool. 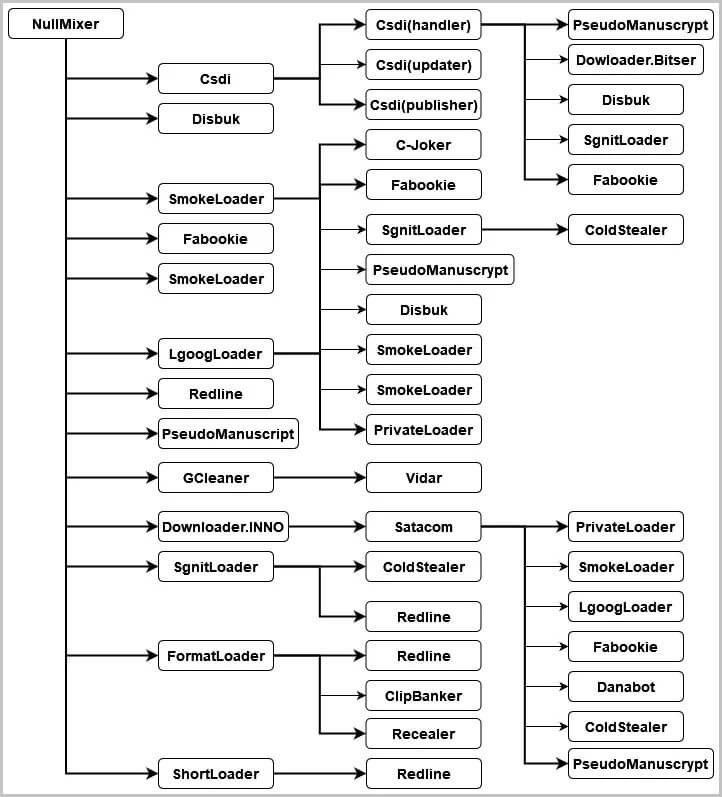 It is unclear why the operators of NullMixer chose to install and launch all these malware families simultaneously, as it would be practically impossible for the malware to run on a breached machine and to not generate symptoms of compromise for the victim to observe the infection.

Some symptoms that your machine has been infected with NullMixer could include heavy hard disk activity, increased CPU and memory utilization, unusual windows opening for no reason, or other performance issues.

Therefore, NullMixer is less of a covert threat and more of a disastrous encounter that will probably only be remedied by a Windows reinstall, so users must always consider the risks of downloading executables from unsafe sources.

Vidar Stealer Returns and Has a New Target: Mastodon

Raccoon Malware Updated To Extract Cryptocurrency from Its Victim’s Computer