All the Proposed Software Were Hacked By the Participants, Except for 3 of Them.

During the weekend of 16th -17th October, a hacking competition took place in China, more specifically in Chengdu’s Sichuan province. The most prestigious and biggest competition in this sense in the country is called Tianfu Cup, basically a Chinese version of Pwn2Own.

16 Popular Software were targeted in the hacking contest and all, but three of them could be breached by the ethical hackers who took part in the competition.

What Was Targeted and What Eventually Was Hacked?

The targets were announced back in July to give participants three to four months’ time to prepare and come at the competition with original exploits with the possibility of a prize if successful. The participant ethical hackers could successfully breach Windows 10, Adobe PDF Reader, Ubuntu 20, Parallels VM, iOS15, Apple Safari, Google Chrome, ASUS AX56U router, Docker CE, VMWare ESXi, VMWare Workstation, qemu VM, and Microsoft Exchange.

Basically, the participants managed to hack all the proposed targets, except for 3 which were: Synology DS220j NAS, the smartphone Xiaomi Mi 11, and a Chinese electric vehicle (there is no information on the brand whatsoever).

In the figure below you can see how many times the targeted software were successfully hacked. 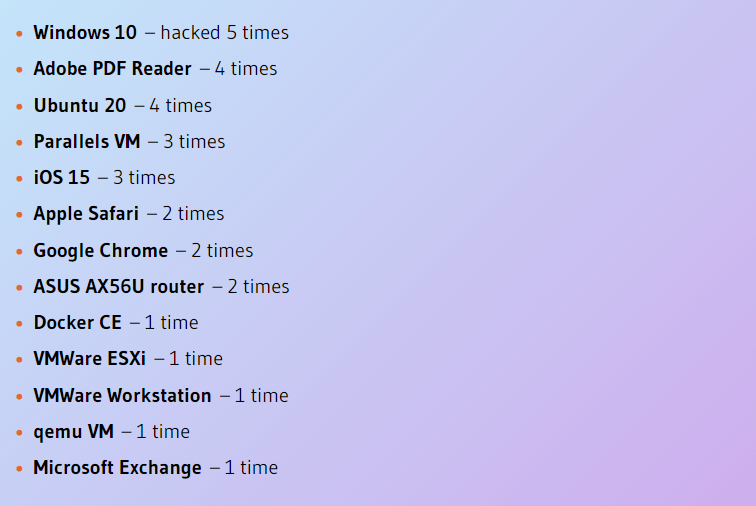 The TianfuCup competition rules were clear: the ethical hackers had a time limit of 5 minutes to breach all the targets. They should make use of an original exploit and then breach the targets to demonstrate its functionality. For the attacks’ legitimacy, three five-minutes attempts were granted. It’s worth mentioning the prize pool which raised to nearly $2 million.

Kunlun Lab’s researchers were the ones who won this big competition owning a prize of $654,500, according to theRecord.media.

Out of all the hacks, two were remarkable. As HackRead explains: 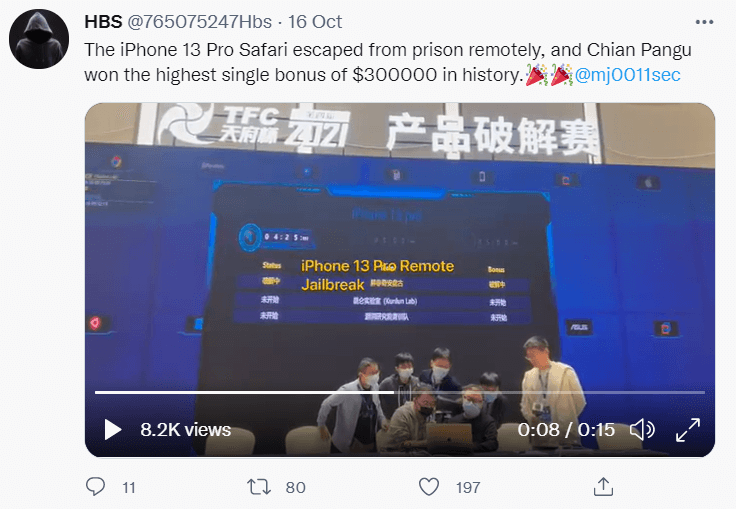 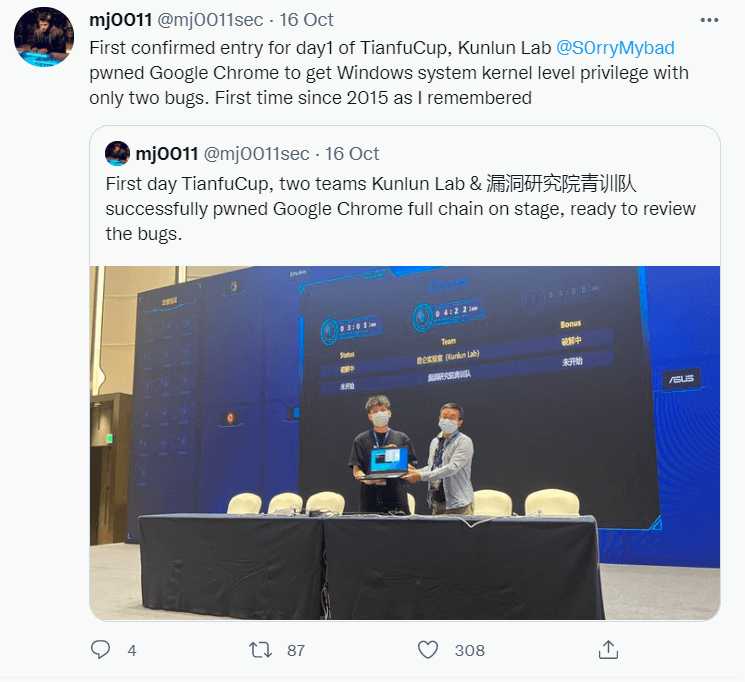 Hacking Competitions: Good or Not?

The security researchers involved in these schemes can be an addition to existing security teams and provide additional eyes on an organisation’s products, meaning bugs will be unearthed and disclosed before cybercriminals get a chance to discover them and exploit them maliciously.

Another senior security intelligence engineer, by her name Kristina Balaam, told Forbes, that in terms of the negative aspects of a hacking competition one fact to be mentioned is the risk that participants might sell or exploit the vulnerabilities they found outside the contest.

However, it is known that there is a certain etiquette where is generally understood that the hackers’ exploits and vulnerabilities found will not be disclosed until vendors patch them.

What Did Microsoft and Google Say About It?

According to the same publication mentioned above, a Microsoft’s spokesperson declared that “all vulnerabilities reported as part of the contest are disclosed responsibly and confidentially. Solutions to verified security issues that meet our criteria for immediate servicing are normally released via our monthly Update Tuesday cadence.”

On the other hand, Google confirmed that patches will come out when a detailed investigation is finalized.

In 2021, Google Issued Over 50,000 Warnings About State-sponsored Hacking Attacks

10+ Chrome Extensions to Boost Your Online Safety in 2021