What Is PXE Boot and How Does It Work?

Short for “Pre-boot Execution Environment”, PXE boot is an important part of data center infrastructure and can be implemented through open-source software or vendor-supported products. It allows automated provisioning of servers or workstations over a network. Anyone working on infrastructure deployment of bare metal servers, embedded devices, and IoT devices can benefit from a more in-depth understanding of PXE.

In its simplest form, the PXE environment is the process of having your device boot from its network card. Relevant instructions are required to boot the device into the PXE environment. The most common way of trying to do this is to configure your Dynamic Host Configuration (DHCP) server to store and serve this information.

When discussing PXE, we need to address three characteristics:

Keep in mind that not all NICs are the same. Many consumer-grade network cards don’t have PXE capabilities. However, this is rapidly changing as advances make it simpler to include extra features in cheaper devices. In data center grade servers PXE-capable NICs are standard.

DHCP allows the client to receive an IP address to gain access to the network servers. There are two types of actors in DHCP. The DHCP server and the DHCP client.

While a DHCP server provides clients with an IP network configuration, a DHCP client runs on computers that join the network and request a configuration.

TFTP is a simple UDP-based protocol for receiving or sending a file and it’s easily implemented in firmware environments where resources are limited. TFTP has no directory listing, authentication, or authorization, therefore you must know the exact path of the file you intend to download.

So, how does the PXE boot work? I will try to explain the PXE workflow as clearly as possible. First, the PXE process allows for the client to notify the server that it uses PXE. Second, if the server uses PXE, a list of boot servers with the available operating systems is sent to the client. The client finds the boot server it needs and receives the name of the file to download. The client then downloads the file using Trivial File Transfer Protocol (Trivia File Transfer Protocol) and executes it, loading the operating system. Ultimately, if the server is not equipped with PXE, it ignores the PXE code preventing disruption in the DHCP and Bootstrap Protocol (BP) operations. 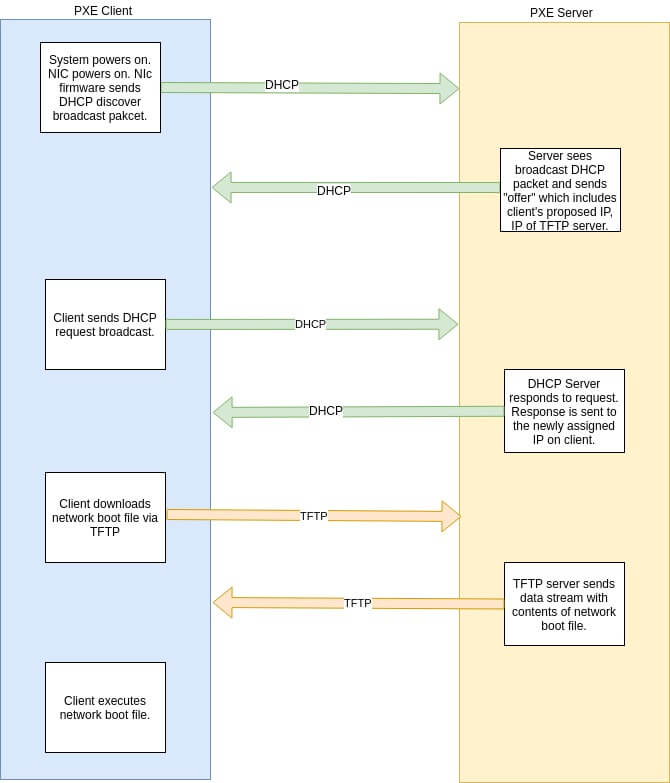 Many organizations face major issues that can be solved with the help of PXE boot, which can automate provisioning or installation of operating systems on numerous machines.

Windows and Linux OS already have mechanisms to automate installation. Normally, you create a seed file or configuration. The seed file provides answers to the questions asked by the OS installer. For Linux, examples of this are Debian Preseed or Redhat kickstart files. However, you will still need access to the installation media on CD/DVD-ROM or a USB drive. Having a human dealing with the USB drive is time-consuming and prone to error. The benefits of using PXE boot, however, are not few:

PXE is a standard-based approach to solving the problem of getting the OS onto the system without a human being putting media (USB, CD/DVD-ROM) in the system. It does this by bootstrapping the machine over the network. When you want to maintain or install the system for multiple computers without inserting a CD or USB into these computers one by one, you can try the PXE boot to install the system. If your computer does not start properly and cannot be started by loading an image file on the internal hard drive, you can also try the PXE boot.

Additionally, with PXE, the client machine doesn’t need an operating system or even a hard disk, it can be rebooted in the event of hardware or software failure, allowing the administrator to diagnose and fix the problem, and, ultimately, new types of computers can easily be added to the network since PXE is vendor-independent.

As explained above, some of the benefits of PXE are that you can boot a machine without any attached storage device, which makes them more efficient and also costs less. You also wouldn’t need to carry a USB device around with all the recovery utilities you need, you can just boot a malfunctioning computer from the network and diagnose it by using a system rescue toolkit or a backup recovery system.

Booting from the network is much more complicated to set up than just writing a USB stick with your favorite recovery system, but it means you generally only need to set it up once for your entire network and it can be reused over and over again without wondering if the USB stick or SD-card is faulty while doing recovery.

All in all, PXE is a very powerful tool for automating and managing the provisioning and updates of data center infrastructure, embedded devices, IoT devices, and even workstations. I hope I’ve provided you with a clear understanding of PXE basics. What are your thoughts on the matter? I would love to read your comments in the section below!

In any case, thanks for the explanation!