What is a Hotfix? Definition, Challenges, and Best Practices

Welcome back to the wondrous world of patch management. Today we’re going to clear the air a bit by deliberating about hotfixes (not hot flashes). So, what is a hotfix? A hotfix can be regarded as a patch, but a patch is not a hotfix – makes a whole lot of sense, doesn’t it? Not to worry; all will be clear faster than you can say “quick-fix engineering update”. Enjoy and don’t forget to subscribe.

What is a Hotfix? Definition and Examples

A hotfix is a software update designed to remediate a very specific operational or security issue. Paging all PC gamers out there – back in 2009, the gaming community lashed out at Gears of War developers due to the game becoming unplayable. Long story short, GOW clocked out on the 28th of January 2009, which meant that customers would have had to MacGyver the PC’s clock to be able to play the game. And because this is the kind of thing that could make a company go out in flames, the developers released a hotfix that solved the issue. That’s just one example and plenty more where that one came from. Let’s get back to the topic at hand.

From a technical standpoint, there’s no difference between an update, patch, or hotfix meaning that, deep down, at the code level, they are, more or less, very similar. Take a moment to consider CUs (i.e., Cumulative Updates) – new and old updates bundled together that help us improve security, gain access to new features, and remove deprecated or vulnerable applications. In CUs, developers are also careful to pack all the hotfixes released to date, ensuring their availability through later iterations. Okay, so far, we’ve established the following facts: hotfixes are updates (but not exactly) meant to address very specific issues (remains to be seen), and they may be bundled together with other types of updates. So, who’s to say that a hotfix is any different than, say, an optional update? Let’s take this a notch higher.

The “hot” part of hotfix means that this improvements-carrying package was designed to deal with a ‘live’ app. Basically, patching it on the move – it’s like being in a hot-air balloon and using a needle and thread to stitch up all the small holes that may appear during your journey. Believe it or not, live app hotfixing is just like that; after finding code flaws that may impact the app’s stability and/or security you quickly push out a hotfix to address the issue and, of course, ensure that the fix will become a part of the next update bout.

If it’s so straightforward, why do we need update bundles and bug fixes? Because they often tend to cause more problems, than actually solve them. For instance, a hotfix for a major security issue may severely impact the application’s performance (i.e., the app becoming sluggish, unresponsive, crash more often, experiencing Read/write issues, etc.). That’s why it’s always a good idea to bench-test these fixes before pushing them to your applications. We’ll talk more about that in the upcoming section dedicated to the hotfix lifecycle (management).

Another thing worth mentioning is that the term “hotfix” was coined by Microsoft. Although it’s their brainchild, it does not have exclusive rights to it, meaning that any developer can push out a hotfix.

Anyway, not that you have an idea about what a hotfix is, let’s see a couple of examples.

Just because hotfixes are meant to mend specific issues, it doesn’t mean that they are excluded from the regular patch management process.  Let’s consider the following diagram from SQLShack: 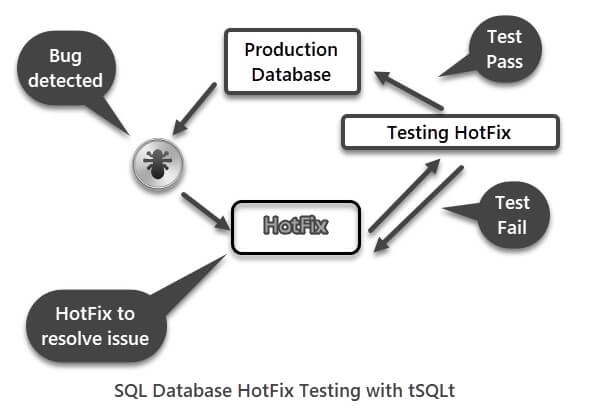 Allow me to break it down for you. This hotfix lifecycle management representation is related to an SQL Production Database. At some point in time, someone would find a bug nesting in this database. The next step would be to analyze the bug and develop a functional hotfix than can resolve the issues. Once the hotfix’s up and about, it will be subjected to various stress tests to ensure app integrity and stability. If the hotfix passes the test, it will be applied to the Production. If not, then it’s back to square one, with another round of tweaking and testing. Now, if you’re interested in getting your hands ‘dirty’ with some hotfix testing, do pay a visit to SQLShacks’s official website.

As you can see, when it comes down to management, hotfixes receive the same ‘treatment’ as patches and updates. One more thing to discuss here: can a hotfix be requested by a party other than the developers/QA team? The answer is “yes” and here’s a shocker for you – most of the time, the hotfix requests come from end-users – customers who stumble upon these bugs and call upon the devs to fix the issue as fast as (humanly) possible.

On-demand hotfix development & testing is a different breed, one that plays by its own rules. According to this blog post by Techno Trice, there are 8 steps to testing and releasing a hotfix.

As to the mechanics, on-demand hotfix development, testing, and deployment, it goes something like this. First, the customer will signal the bug. The request is then processed by QA and the Dev team, checking its validity. When that’s done, the Dev team will begin working on the hotfix which they will later ship to the QA Environment for a battery of tests. If the hotfix passes the test, it’s then delivered to the customer who, in turn, deploys it in a test environment of his own. Should everything check out okay, the hotfix will be deployed (Production) and the QA + Dev ticket closed. However, if the customer turns down the hotfix for whatever reason, the process starts all over.

This about wraps up my article on what is a hotfix. Hope you’ve enjoyed my writing and, as always, I’m going to leave you with a couple of nifty tips and tricks on how to handle your hotfixes.

Intune vs. WSUS vs. SCCM – Costs, Benefits, Ease of Use, and Deployment