Here’s How to Stay Protected.

The method is not new as this sophisticated cybercrime organization (also referred to as APT-C-41 or Promethium) was noticed delivering malicious WinRAR installers in highly targeted operations between 2016 and 2018.

In 2016, StrongPity was detected by Kaspersky in a campaign that targeted specific users in Belgium and Italy who were interested in Truecrypt and Winrar software. These APT groups’ campaigns are not commonly seen but different research groups have detected several StrongPity campaigns over the years.

Because the malware ‘conceals’ itself inside a reputable program that is often available within companies, this attack technique is extremely effective.

In the early phase of the attack, the user downloads and runs the “Notepad++” setup file. The threat actor adds an Original Notepad++ icon to the malicious file in order to make it more convincing for the target.

As explained by BleepingComputer, once the malicious file is executed, it generates a new folder called “WindowsData” under C:ProgramDataMicrosoft and drops three distinct files on the computer that has been compromised:

The first stage executable starts the genuine Notepad++ installation after the file is dropped, while the user is unaware of the two malicious files being installed in the background.

When the setup is complete, a new service called “PickerSrv” is generated, which ensures the malware’s persistence by executing it upon startup. 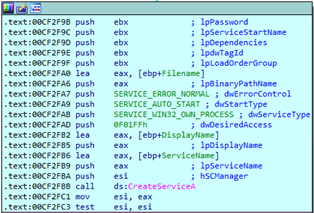 All user keystrokes are recorded by the keylogger and saved to concealed system files deposited in the ‘C: ProgramDataMicrosoftWindowsData’ folder. The StrongPity malware can also steal files and other information from the system.

While the keylogger runs in the background, winpickr.exe repeatedly checks C:\ProgramData\Microsoft\WindowsData folder for .tbl files. When a file is found containing the attributes of the log files created by ntuis32.exe (hidden, system, and read-only), it connects to its C&C server (https[:]//advancedtoenableplatform[.]com/contact[.]php) for file transfer. After sending the file to the C&C, winpickr.exe deletes the file on the endpoint.

What Can Users Do in Order to Be Protected?

Several other websites offer the source code editor, some of which pretend to be real Notepad++ portals but may carry adware or other malicious applications.

According to BleepingComputer, the URL that was delivering the malicious Notepad++ installers was removed after analysts identified it. However, the attackers were able to quickly register a new one.

What Is Screen Pinning in Cybersecurity?