BEWARE: Cyber Criminals are Having a “Field Day” with Software Vulnerabilities [Updated]

The main problem here is that time periods between patches don’t follow and fix the great amount of vulnerabilities that continue to appear.

Some vendors are improving though.

Security holes in software is arguably one of the most used attack vector malicious hackers employ in a modern IT environment, with exploits accounting for 60 – 90% of the attack , depending on which data you look at.

This is precisely one of the reasons why you would think that software companies should be very quick at closing their security gaps, but the actual situation indicates quite the opposite.

If we take a quick look at the most vulnerable 3rd party software in the market, the list narrows in on some of the most used software components in the world.

The Numbers Speak for Themselves

Of these 4, Adobe Flash Player accounts for 314 registered vulnerabilities alone in 2015. That comes to 26 vulnerabilities PER MONTH! The next piece of software on the list is Acrobat Reader with 130 vulnerabilities or 10,8 per month, still quite high, but not as extreme. 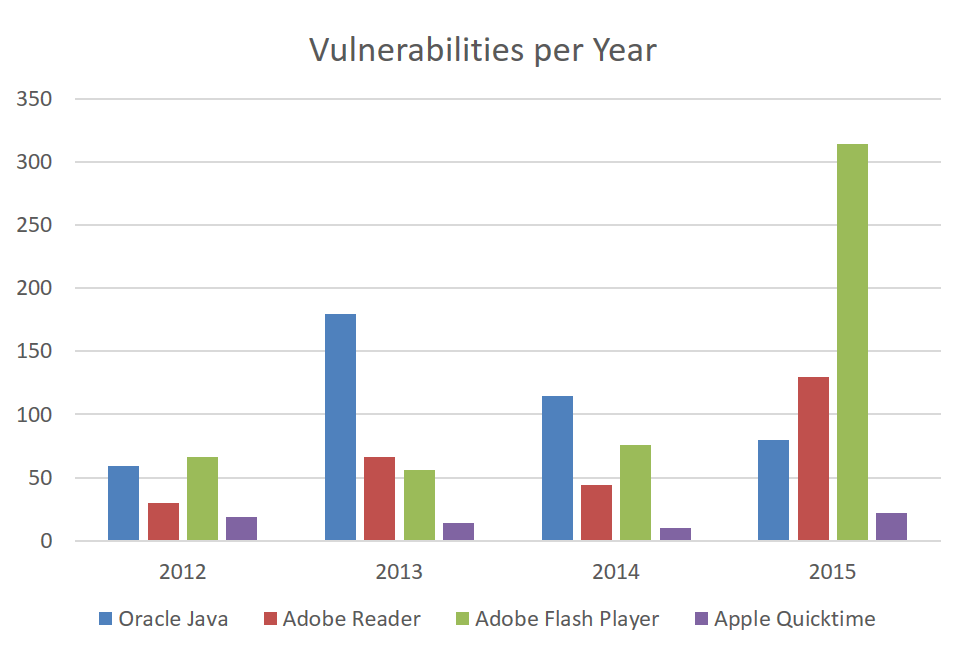 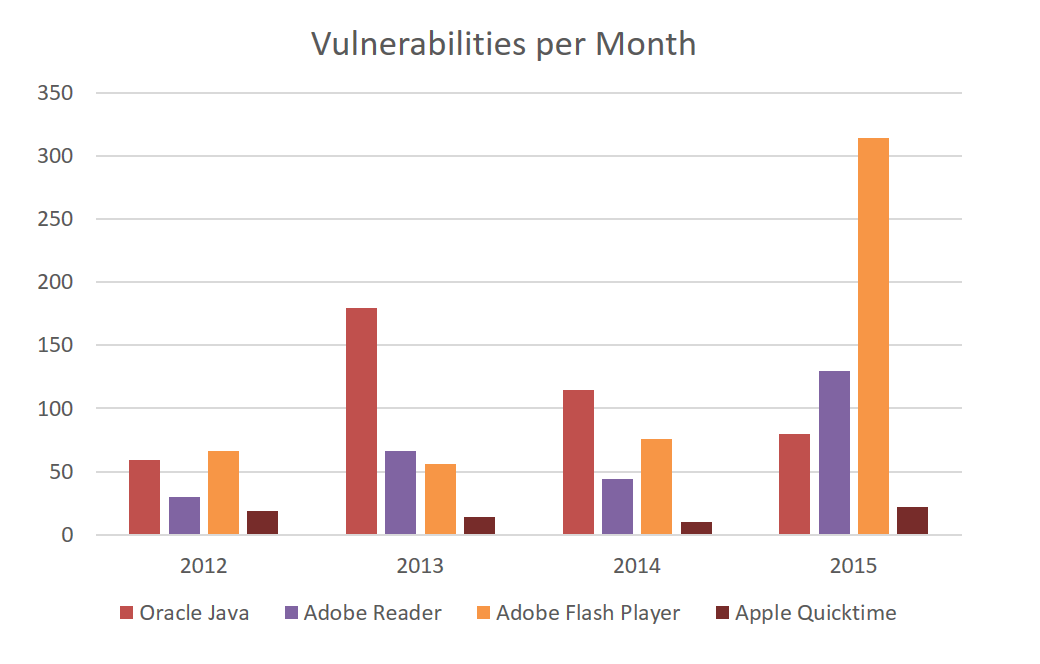 If you look closely at the numbers, it is highly concerning that Java has an average of roughly 9 new vulnerabilities discovered every month. That is an extreme number. Looking at Adobe’s products, that number is significantly lower but still very alarming, ranging from 3 vulnerabilities on average in Acrobat Reader to 4 in Adobe Flash Player.

The only decent performer in the field is Apple with their Quicktime software, which has approximately 1,2 vulnerabilities per month and that number appears to be decreasing, while the others show no general improving trend.

Not only that the severity of the vulnerabilities above are extreme as well.

The average severity of each of the vulnerabilities on these products is listed below with a CVSS (Computer vulnerability severity system) score, where 7-10 means a HIGH number!

When showing the data on a visual graph, you have an indication that all 4 products are clearly at or above the limit of critical vulnerabilities number on average. 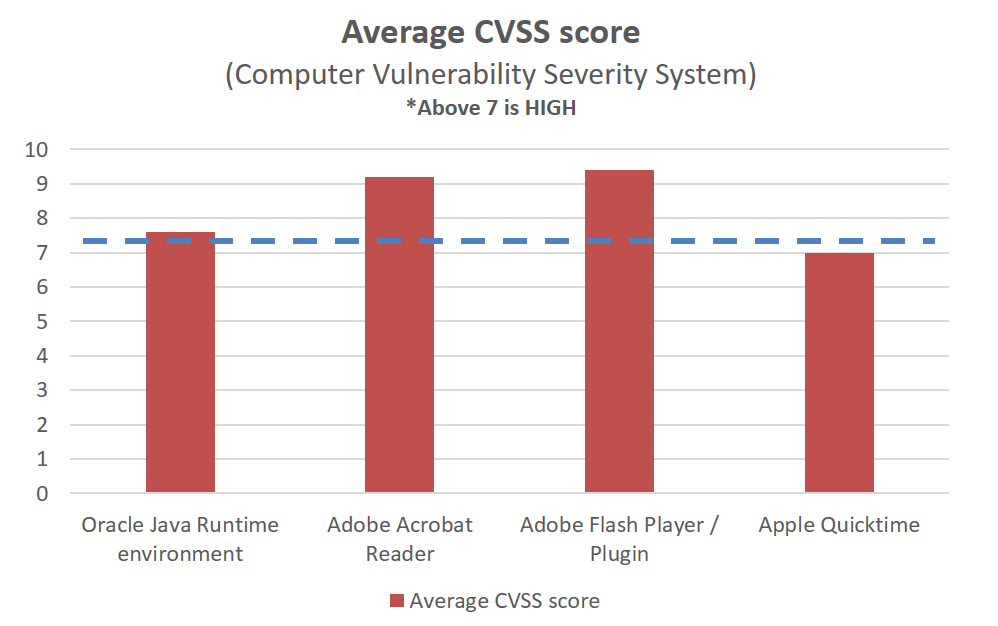 So not only is the number of vulnerabilities highly alarming, but it also represents an important attack vector which poses a severe security risk for our computer systems. That becomes relevant because a very commonly used attack vector on our systems today is by linking to URLs which point to malicious content that can exploit known software vulnerabilities.

In fact, another recent study performed by Heimdal and one of its partners showed that 27% of all delivered emails contain malicious URLs, which try to access your PC by using malicious code or exploits.

Naturally, all this concern about exploits only becomes relevant if these 4 pieces of 3rd party software we cover in this article are actually being used, so we also looked into that as well. The data stacks up as below and we took the liberty of combining it with the severity score. 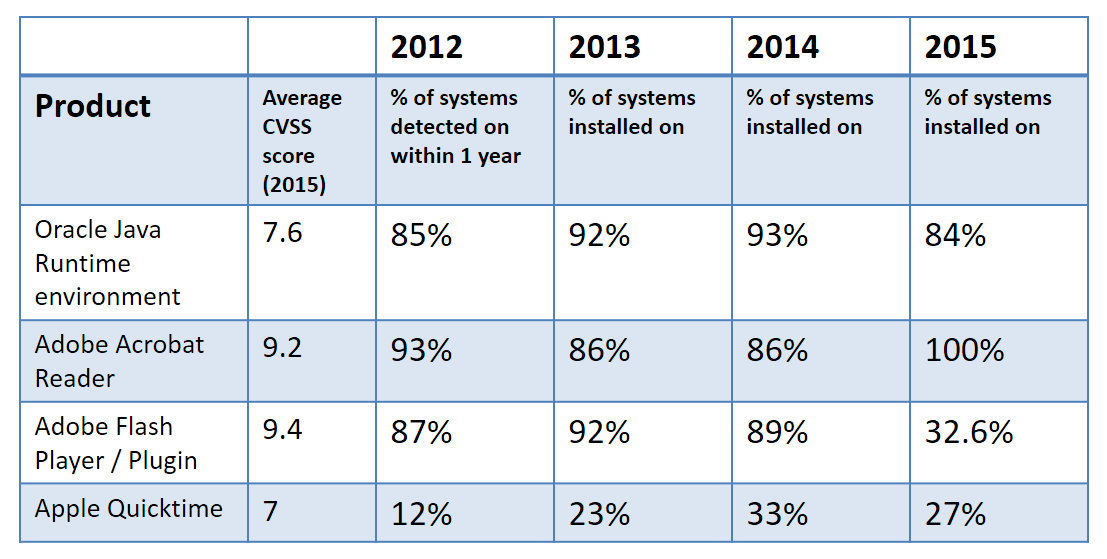 If we place the data on a visual graph, we notice a clear market evolution for Adobe Acrobat Reader and the high average usage of the Oracle Java. 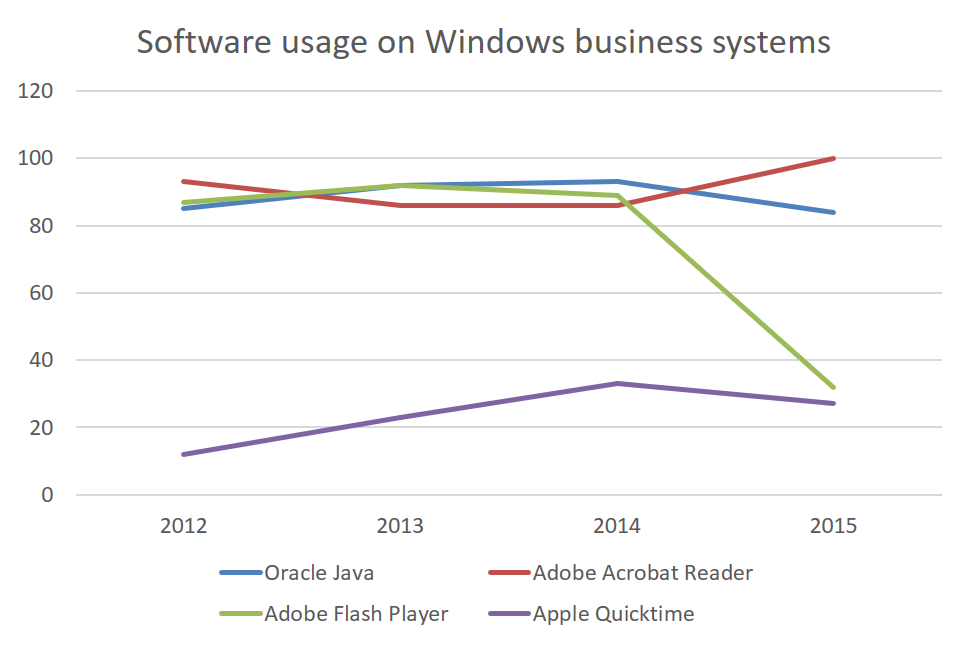 All this data is more than scary. Intelligence shows that usage of Java, Acrobat Reader and Adobe Flash Player is very common on business computers and has been for a while. The good news is that Flash usage has dropped significantly, mainly because HTML 5 replaced the need for having it installed, but also because Flash was a preferred attack vector in 2015. Meanwhile, the widespread usage of software is most likely linked to the fact that we consume more and more data on the computer, and that we access a broader variety of software to do so.

Most likely, your private computer system is not much different from a standard business computer, therefore consumers, as well as companies, should be very aware there is a crucial risk here.

We now know 4 key facts which should have your full attention, since they put you or your corporate data at risk:

Knowing all this, you may think that manufacturers keep us safe by quickly fixing these problems for their users and customers. Well, our analysis indicates that is not the case.

Take a look below at the graphic which illustrates the data: 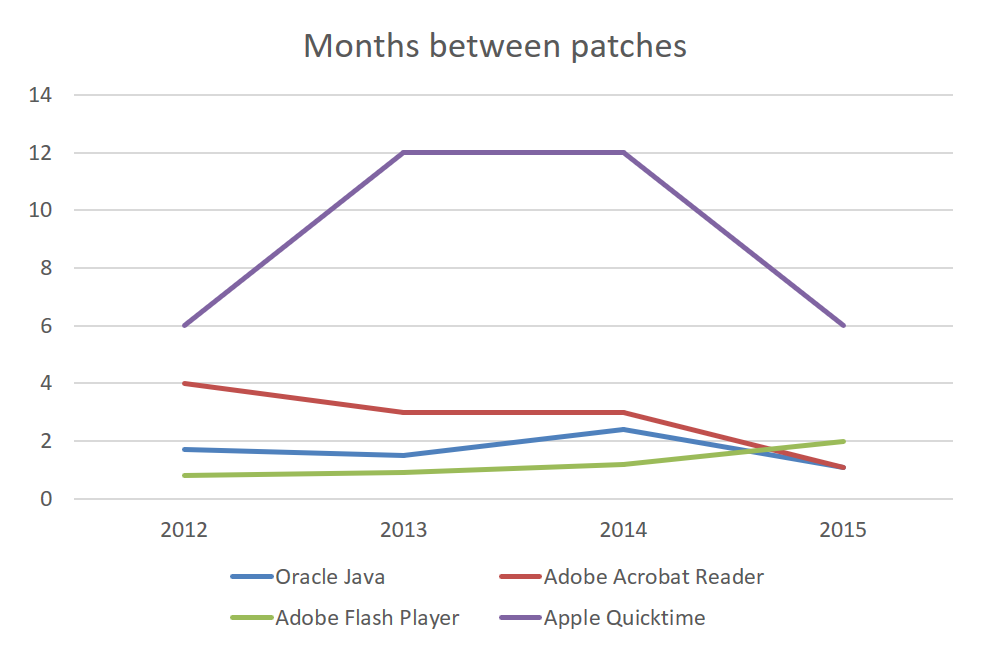 Despite the fact that vulnerabilities are of a severe nature (close to wide open) and the fact that in Oracle and Adobe’s cases there are plenty of vulnerabilities to choose from, the time between patches is quite frightening, even though it has dropped in 2015. On average, a patch for Adobe Flash is released every 2 months and for Apple Quicktime at every 6 months.

Vulnerabilities in Adobe Acrobat Reader are patched significantly faster averaging every month, while Oracle Java managed to reach the same patching pace. But imagine what a cyber attacker could have done in 6 months, while Apple patched Quicktime! Moreover, Apple even discontinued support for Quicktime on Windows in April 2016.

With that in mind, we took the liberty of calculating the average amount of vulnerabilities discovered before a patch is released. Bearing in mind that vulnerabilities may be discovered in blocks and not 1 by 1 – that might skew the data a little. We combined this with the % of systems they are installed on, just to give you an idea of the extent of the problem.

We tried to illustrate the data analyzed, so that you may have an easy overview of the problem, which got out of hand in 2015: 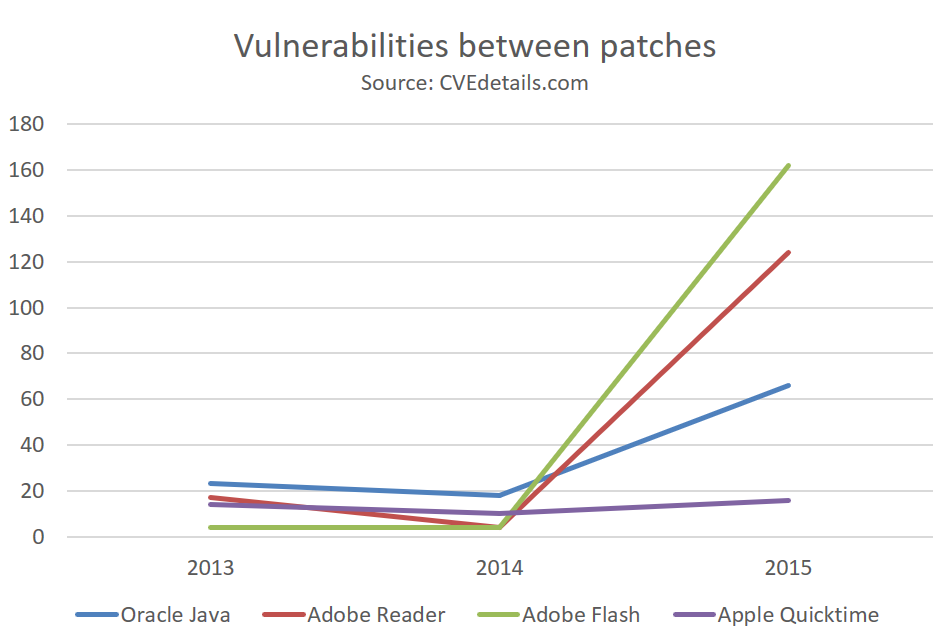 So why are vulnerabilities a big problem for software manufacturers to deal with?

Well, naturally, software manufacturers want to offer more and more features to their users and keep their software cutting edge. By adding new features they create new backdoors and loopholes for attackers to use and exploit, creating more opportunities for cyber criminals that try to obtain your data.

So what can you do to protect yourself or your company?

How Flash Vulnerabilities Expose You To Attacks

Why Java Vulnerabilities Are One of Your Biggest Security Problems