Hackers Could Get Windows Admin Privileges Through a Remote Print Server

Exploitation of Windows Print Spooler Goes On with One More Discovery.

Researchers have continued their investigation on PrintNightmare by further looking for ways to exploit it. Benjamin Delpy has found a new way where anyone could get Windows system privileges if they install a remote print server.

The remote print server was created by researcher Delpy to illustrate that PrintNightmare could still be compromised.

How Does the Exploitation of the Remote Print Server Work?

PrintNightmare is a zero-day vulnerability, tagged as CVE-2021-34527, that was leaked online mistakenly via a POC (proof of concept). Microsoft provided security updates at that time, but researchers did not stop to look for ways to compromise the vulnerability in order to test it.

As Bleeping Computer shows, Benjamin Delpy, the creator of Mimikatz, has continued his work in developing crafted printer drivers and Windows API abusing methods to see if the vulnerability is gone or not.

How to Fight Against the Remote Print Server Vulnerability?

Benjamin Delpy has provided some ways to fight against this new threat. The methods are also described in Will Dormann’s advisory, a CERT/CC analyst.

But this way, they could not have access to printing locally or remotely.

The second recommended method would be to block RPC and SMB traffic. This is a solution that puts existing features at risk, as they might not longer work, as Doorman explains.

Limited testing has shown that blocking both the RPC Endpoint Mapper (135/tcp) and SMB (139/tcp and 445/tcp) at the firewall level can prevent remote exploitation of this vulnerability. Note that blocking these ports on a Windows system may prevent expected capabilities from functioning properly, especially on a system that functions as a server.

The third recommended method would be to find the Print and Point functionality and just restrict it. Use the “Package Point and print – approved servers” group policy and make sure that you restrict the Print and Point. This way, users who do not have elevated rights would not be able to deploy print drivers via Point and Print. To do so, the approved list should contain the print server they want to install.

What Is the Point of Creating This Remote Print Server?

As Benjamin Delpy shared with Bleeping Computer, he has made these investigations in order to determine Microsoft to make a priority from finding a solution for this bug. He also mentioned that the IP address of the one who might exploit it could not be detected, but, he suspects, as per his research, that Russian IP addresses take advantage of print servers. 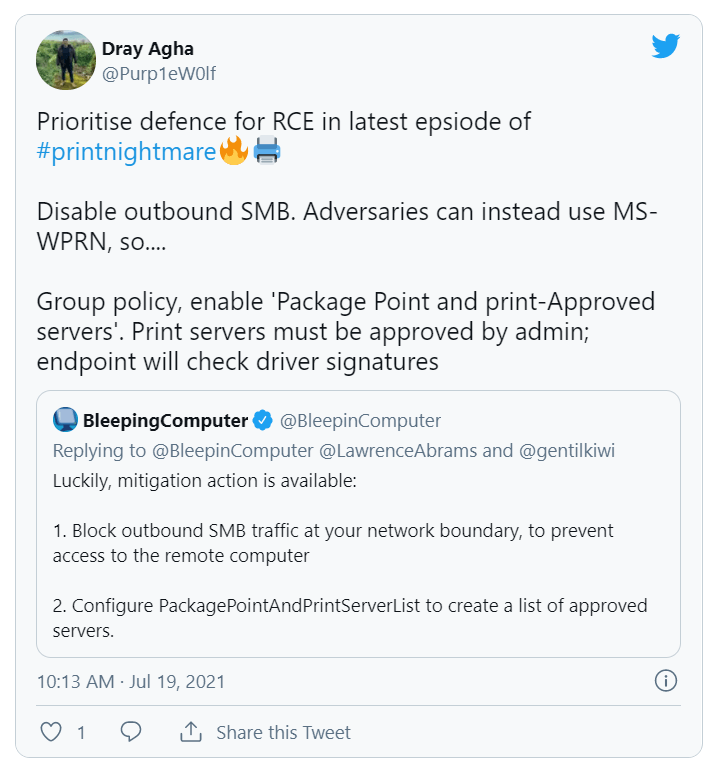 PrintNightmare Still in the Game: Patches That Do Not Fix the Issue and Other Updates