A New Parcel Delivery Scam Is Using a New Twist. The Scammers Are Now Sending Out Personalized Messages to Potential Victims.

The Police stations have been receiving a large number of reports on a daily basis from victims that have been scammed in a newly discovered parcel delivery scam.

The victims were scammed through convincing emails and personalized text messages. 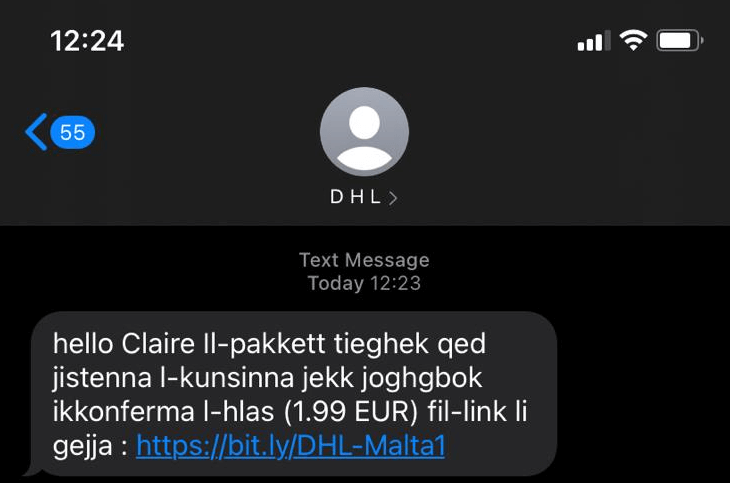 The initial parcel delivery scam started in April but it has intensified in the recent weeks with messages being sent in Maltese and English that are created to look like are coming from numerous delivery groups like MaltaPost and DHL.

The scammers are making between €800 and €1,800 per victim, but the highest amount defrauded from one single person was €5,000.

How Does This Scam Work?

The texts that the victims are receiving come from an unknown number and are urging the victim to access a link in order to confirm payment.

It’s interesting to note that this new scam has an added layer as it contains the name of the intended victim, in an attempt to make the messages more convincing.

Not the Only Scam Operating

Some warnings have also been issued in regards to another scam in which the caller claims to be a member of the police, as several people have reported receiving calls with a recorded message in English telling them about suspicious activity related to their e-ID account, or that an arrest warrant in their name had been issued.

Back in May, several people had fallen victims to a scam in which they received a text message that looked like it was coming from MaltaPost that was asking them to click a link in order to arrange for parcel delivery and asking for the payment of a fee, and MaltaPost issued two warnings about the scam in an attempt to keep their customers safe.

How Can You Tell if a Certain Message Is a Scam?

11+ PayPal Scams: How They Work and How to Protect Your Account