Hackers Use Malicious Documents That Are Hard to Detect.

A fresh variant of a phishing campaign has been recently detected. By its nickname MirrorBlast, its targets are finance enterprises. The attack methods it uses consist of malicious Excel documents that are almost untraceable.

MirrorBlast: How Does It Work?

The researchers who discovered this new phishing campaign were those from Morphisec Labs and according to their report, here is how MirrorBlast works:

What’s interesting to mention is the way the malicious Excel file has been developed to bypass normal security software, as the researchers under discussion registered low detection rates. 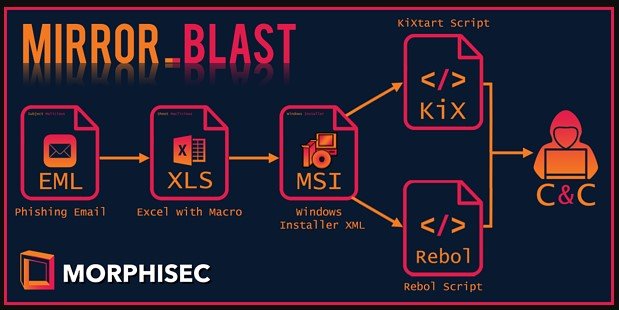 New Phishing Campaign MirrorBlast: Who Is Behind?

According to the same experts who made the discovery, it seems that behind the new phishing campaign dubbed MirrorBlast is the TA505, a Russian threat group known for their particular methods of dropping Excel documents.

The attack chain of the infection bears a similarity to the tactics, techniques, and procedures commonly used by the allegedly Russia-based threat group TA505. The similarities extend to the attack chain, the GetandGo functionality, the final payload, and similarities in the domain name pattern. TA505 has been active since at least 2014 and, as far as analysts can ascertain, has a financial motivation for their actions. As a group, TA505 is most known for frequently changing the malware they use as well as driving global trends in malware distribution.

Besides, as per another report attributed to NCCgroup, TA505 exploits zero-day vulnerabilities in their cyberattacks: for instance, vulnerabilities exploitation with the goal of Clop ransomware deployment associated with attacks based on double extortion.

Phishing remains still a very well-known type of social engineering attack, as hackers regard human liability as a certain path to reach their goal. Most people will often not pay enough attention when clicking on a malicious document in a phishing e-mail.

To protect your business, you must ensure that you have the best security solutions to keep employees far from cyber threats. Heimdal™ has invested in the best email protection, having two excellent solutions: Email Fraud Prevention and Email Security. The first uses 125 analysis vectors combined with threat intelligence focusing on Business Email Compromise or CEO fraud, the latter keeps mail-delivered threats and supply chain attacks away. Curious? What are you waiting for? They are one click away!

Exquisite site thanks for publishing it.