Hospital Robots Have Been Found to Have Critical Vulnerabilities

Five serious vulnerabilities in hospital robots that served for the transportation of medical supplies have been patched by vendor Aethon.

Hundreds of hospitals rely on Aethon’s mobile robots to do basic, repetitive jobs and supplement current workforces. TUGs do errands for healthcare workers, such as delivering medications, cleaning, and dropping off linen and other supplies.

By exploiting the five discovered vulnerabilities, hackers can take control of a robot’s activities and perform a series of malicious actions that could have an impact on patient care like:

The flaws may also be used to “take control of the robot’s movement and crash them into people or objects, or use them to annoy patients and personnel,” according to the researchers.

In their report, the security experts described thoroughly what can a hacker do if successfully exploiting these vulnerabilities: 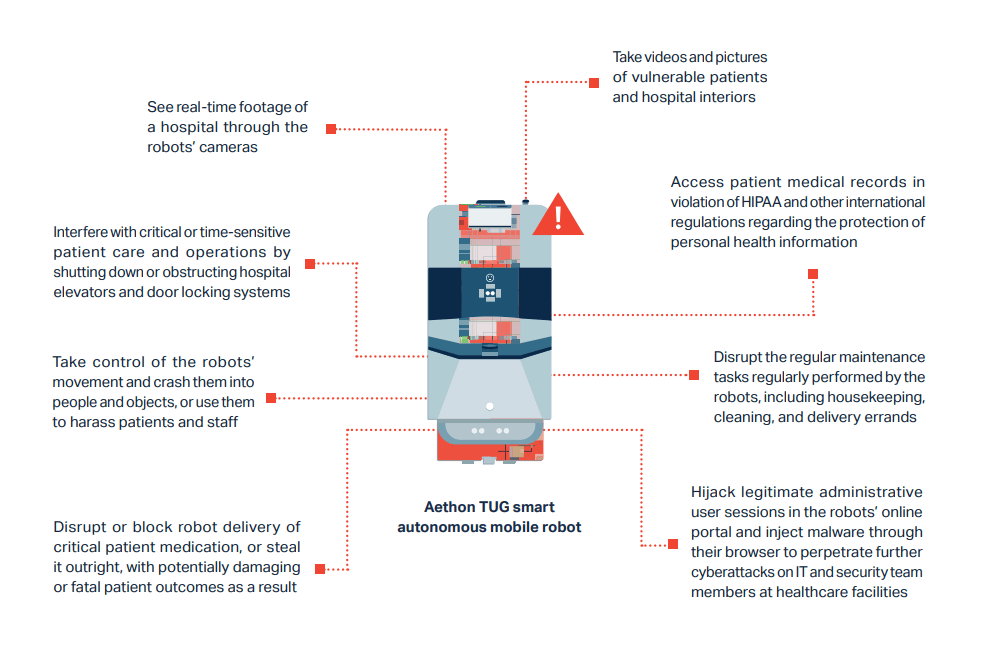 What Are the JekyllBot:5 Vulnerabilities?

The discovered JekyllBot:5 vulnerabilities have been issued CVEs:

These vulnerabilities were identified during an audit on behalf of a client healthcare provider. While Cynerio’s customer had not connected their robots to the internet, making them immune to active hacking, the cybersecurity firm stated “many” hospitals in the Cynerio Live research lab had internet-connected robots that could be controlled remotely, according to ZDNet.

The vendor received notification about the vulnerabilities from the US Cybersecurity and Infrastructure Security Agency (CISA).

Cynerio collaborated with Aethon to issue appropriate patches, which are now included in the newest version of TUG firmware. Aethon also produced firewall modifications for customer hospitals in order to limit public access.