Following the cyberattacks that involved the Hive ransomware, the FBI (Federal Bureau of Investigation) has revealed some technical data and IoC (Indicators of Compromise) related to this topic.

Hive ransomware is a data encryption malware that has recently come to the public’s attention through its attacks targeting the Memorial Health System where employees had to use paper charts to go on working as their computers got encrypted. Another victim was also Altus Group, where hackers stole business info and files from the software provider that was later made public on HiveLeaks.

Hive Ransomware: How It Works

According to the document published by the FBI, Hive ransomware, which was initially noticed in June 2021, has the below characteristics:

According to BleepingComputer, among the files that hackers made use of in Hive ransomware attacks are Winlo.exe, useful in dropping 7zG.exe, the 19.0.0 of 7zG.exe, and also Winlo_dump_64_SCY.exe, remarked through the extension .KEY and the ransom note dubbed HOW_TO_DECRYPT.txt

An example of the ransom note can be seen below: 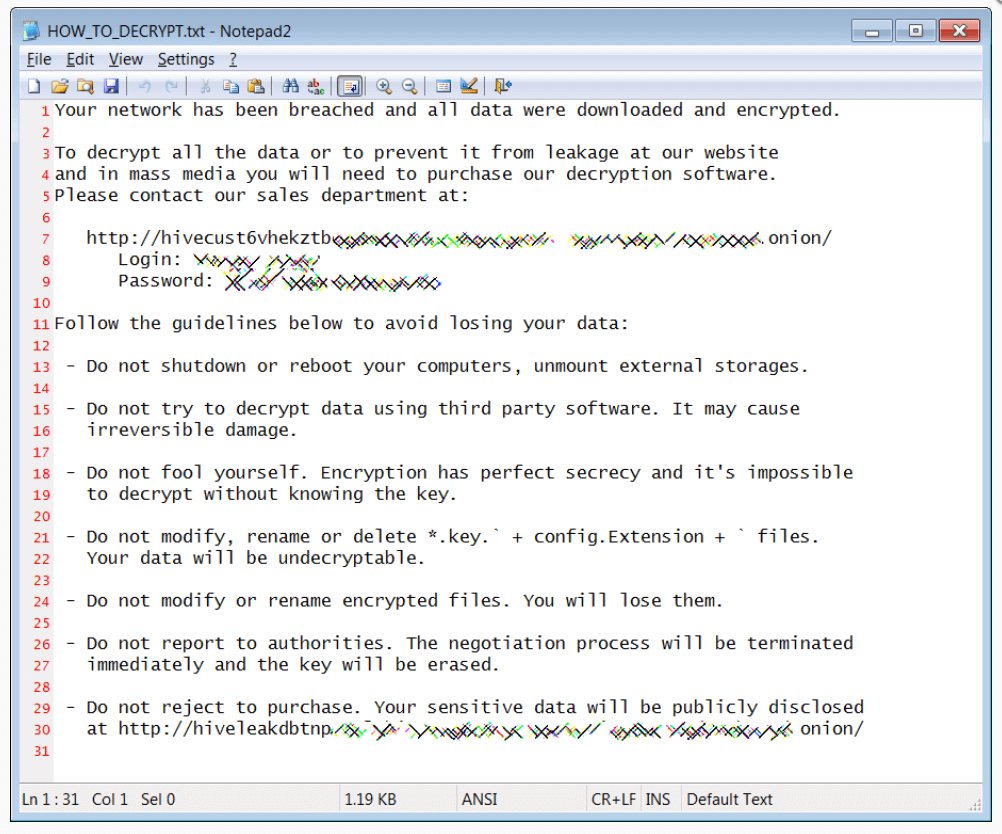 Even if it’s not a common practice when disclosing technical reports, the FBI also provided there the link to the website where data leakages are usually performed following Hive ransomware attacks. More exactly, cybercriminals reveal there the stolen info belonging to the organization that did not engage in paying the ransom.

In this regard, various victims were urged to pay the ransom:

The initial deadline for payment fluctuates between 2 to 6 days, but actors have prolonged the deadline in response to contact by the victim company.

The overall advice from the Federal Bureau of Investigation mitigates for not paying the ransom, as cybercriminals are not trustworthy and there is no guarantee that the stolen info will not be further made use of.

Ransomware attacks should be reported by organizations to the local field office in a timely manner.

Other general mitigation measures include: