Hackers Breached the Network of Gaming Giant Electronic Arts (EA) and Claimed to Have Stolen Over 750 GB of Data, Which Includes Game Source Code and Debug Tools

Hackers managed to break into gaming giant Electronic Arts, therefore EA got breached and Battlefield, FIFA, and The Sims were possibly stolen, along with multiple related internal tools.

EA has confirmed the data breach saying that this:

was not a ransomware attack, that a limited amount of code and related tools were stolen, and we do not expect any impact to our games or our business.

The journalists at BleepingComputer got in contact with the threat actor that is selling EA’s data and claims to have stolen the full FIFA source, EA game clients, as well as points used as in-game currency, that are known to be used by cybercriminals for money laundering purposes.

The attackers did not provide any further details when asked how they gained access to EA’s network.

The Stolen Data Is Worth $28 Million

As of now, the attackers are claiming to have access to the full list of EA’s services, therefore telling customers that are willing to pay $28 million for the stolen data that they will also gain “full capability of exploiting on all EA services”.

In the above-mentioned forum posts, the hackers declared to have taken the source code for FIFA 21, as well as code for its matchmaking server.

The hackers said that they also obtained the source code and tools for the Frostbite engine, that powers a large number of EA games including Battlefield, along with other stolen information like the proprietary EA frameworks and software development kits (SDKs), bundles of code that can make game development more streamlined.

The hackers claim to have stolen a massive trove of data from EA’s network, including, and also shared screenshots of directory listings and source code in order to provide proof that the stolen information is legitimate. 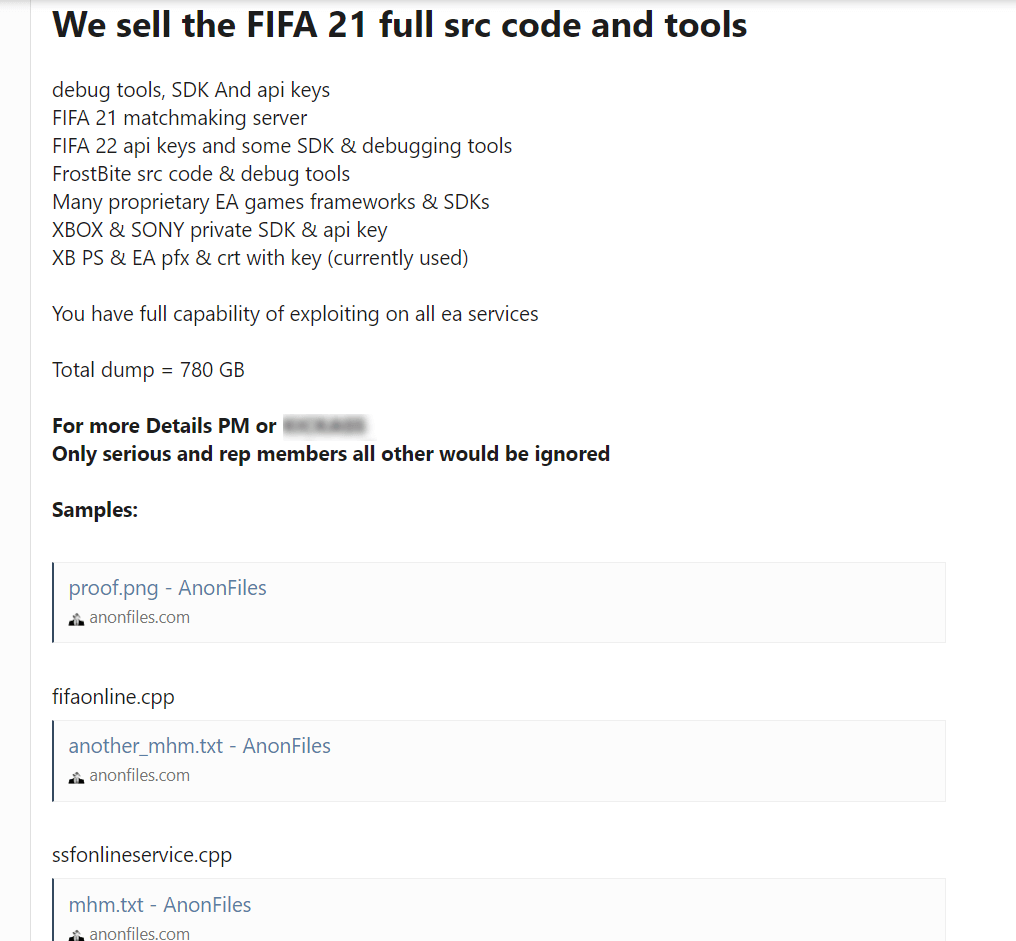 EA confirmed that it had suffered a data breach and that the information listed by the hackers was the data that was stolen.

We are investigating a recent incident of intrusion into our network where a limited amount of game source code and related tools were stolen. No player data was accessed, and we have no reason to believe there is any risk to player privacy. Following the incident, we’ve already made security improvements and do not expect any impact on our games or our business. We are actively working with law enforcement officials and other experts as part of this ongoing criminal investigation.

This is a valuable hacking operation as the Frostbite engine, which hackers claim to have stolen the source code for, is a powerful game creation tool used in dozens of games, from FIFA to the Battlefield series and several recent Star Wars games from EA, therefore the source code for the engine could hold significant value for an unscrupulous developer, or for the ones that are making cheat codes and hacks for games.